“Look at the sky. We are not alone. The whole universe is friendly to us and conspires only to give the best to those who dream and work.” 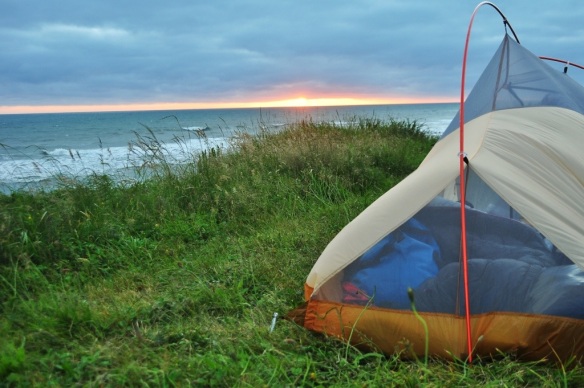 I have learned, after three days of waking up with a wet sleeping bag, that I really do need to start using my rain fly at night since there is so much morning dew. I have learned that it’s not the highways, but going through towns that are the scariest. I have learned to eat, drink, check the map, and ride at the same time, and I have learned that I will eat absolutely everything, even half-cooked plain noodles in lukewarm water. First and foremost though, I have learned that people are so incredibly great, especially to us bikers.

I started out my journey at Crescent Lake in northern Washington. This area, the Olympic peninsula, receives more rainfall than anywhere in the U.S. which makes it a true rainforest. Very green and covered with trees and rolling hills, it reminds me a lot of where I grew up in Oregon. My first night I pulled over on some small dirt road off the highway and slept in the bushes next to an old refrigerator and a decomposing car door. I used the river as my shower and washing machine, and spent most of the afternoon reading. Already I was putting one of the most useful parts of bike touring to the test, the ability to sleep anywhere. The next two nights though, I was taken in by two different couples. I spent one of the nights on the beach sharing the couple’s camping spot. Not only did I get a prime beach spot for free, but I got a lovely afternoon with them and their puppy, as well as a delicious meal (much better than my camping concoctions). The next night I camped in front of another families’ lake house, right next to the water. Once again I spent the night in an amazing location, and even got a hot shower! I now have an invitation and an address for a place to stay ten miles down the road tonight. So far, in only four days, I have been shown a whole different side of our society. Maybe it’s because I am biking, maybe because I am a young solo female, and maybe a bit of both, but I certainly can’t wait to see how the rest of this adventure continues to pan out.

I have now started to develop a routine. I get up around 5h30 in order to be on the road an hour later. In the morning there are very few cars (unfortunately the logging trucks are still in full swing), and it is cooler, so I try and do all my kilometers by eleven or noon. For the first few days I was doing 60-70km a day, while today it will be about 90km by the time I’m done. The thing that has surprised me most, besides how helpful everyone has been, has been how intrigued people are with my trip. No matter where I am, people passing by stop and stare. Others have even taken my picture. In Safeway just minutes ago someone saw my bike, and asked for my blog. I guess I stand out a bit! Another less surprising but common theme is that any parent I meet is worried about me. As one lady explained it, I am collecting worried mothers all over the world! Though they do have a point, it is slightly ironic because so far I have felt safer and more well cared for than on any other trip.

Though I have spent the last few days in the forest, in a few more I will be on the coast (and in Oregon). I absolutely love sleeping, reading, and running on the beach so pretty soon I will be in heaven!

Quite the place to wake up.

This starfish is eating a crab.

3 thoughts on “The Washington Rainforest: 260km”