“We are born into a complex world. Its nature. Its history. Its cultures. Ours to absorb. We are small, but we are fearless. We explore, we question, we test the world. Young and unburdened, we are not afraid of the answers we might find…”

Well, I got stuck again for a week (at this rate it’s going to be months until I make it to Nepal), but it was a much needed break to recharge my metaphorical, well, and camera batteries. Though I’m on the road to meet the locals and experience their ways of life, I will admit it’s very nice to be with my own kind. I ended up in Richikesh, a very touristy town because it’s near the source of the Ganga, and because it has become a sort of yoga capital. The town is filled with what I refer to as “lost travelers,” people on the road for years on end, often because they have no home or family and don’t really know what to do. India seems to attract many of these such travelers as it is easy to get a visa and because it is one of the cheapest countries to live in. There were also an astounding amount of yoga fanatics, people who come to India just to take classes and do their daily practice. It was a funny mix of travelers, definitely not what I consider a typical backpacking crowd in most of the world. And since it was a town with so many westerners, I was thankfully not starred at or watched constantly. It was nice to have a few days of easy travel, knowing where I would be sleeping that night and having somewhere to store my bags.

I swam in the river, tried a few yoga classes, and took a few tours with a friend on his motorbike. We went monkey hunting to find these white monkey who are even more amusing and docile than the brown ones that run through town.

I found a nice little place that served all you can eat dal, rice, veggies, and chapati for under a dollar, so I ended up going there everyday for at least one meal. Here is one of the many dishwashers!

On one of the motorcycle rides we ended up at the top of a large hill with a great view all around.

Like many travelers in this town, I slept in an Ashram, kind of like a monetary for Hindus. It was was a relaxing week where I feel I did nothing at all, but sometimes, just being alive- eating, sleeping, going for walks, and reading- is more than enough. 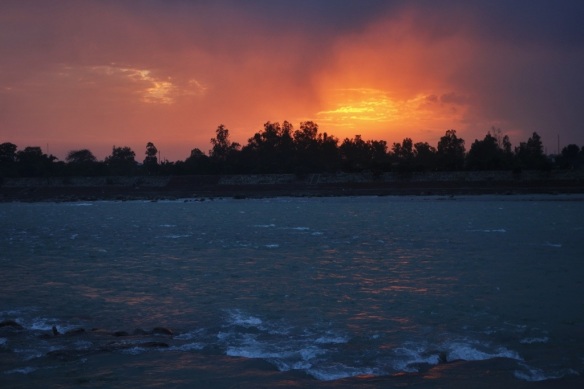