“Life is about the people you meet, and the things you create with them, so go out and start creating.”

“We have a small house, but very big hearts,” the enthusiastic twelve year boy told me moments after his sister (who I had stopped to buy bananas from) brought me home to my first Nepali family. And he couldn’t have been more right. The family was poor, farmers with little more than a roadside stand and a small country house (the kind I have been eyeing longingly) to their name, but I have yet to meet someone anywhere in the world happier than Lokraj, my new little brother for the next few days. His sister, the one who invited me here, is a beautiful laughing girl herself, and the family quickly became my favorite one I have stayed with so far. The children’s mother and father are old, old enough to be their grandparents (I wonder if maybe that is the case), and absolutely wonderful people as well.

This family fit my lifestyle well. I was not looked at sideways when I walked around barefoot (as I am when I stay with wealthier families), and there was no need for makeup or fancy clothes. They also go to bed early, by eight, which fits into my schedule perfectly (of course this also means they are up at five). And best of all was Lokraj, the twelve year old with more energy than me. He was a smart boy with a gift for languages, and had managed to teach himself English in a village where no one else speaks more than a few words. He acted as my guide, translator, and most importantly, Nepali teacher. Every night we sat down with my little notebook and pen as he translated words and phrases for me to write down. And he wouldn’t simply say the word either. Normally he would be bouncing up and down on the bed, using enormous hand gestures as he half yelled these foreign words. Then, after, we would sit on the bed together and do yoga. There is nothing quite like doing yoga when your teacher is a young boy happily shouting out commands such as, “spine is straight yes?!” I loved being at their home, where I was treated like one of them, but not in the suffocating way I have sometimes experienced with other families. When I left their house though, it was kind of a different story because the curiosity was overwhelming.

Here is their house.

Just as the Indian families who fought to keep me for weeks, these guys tried hard to get me to stay more than the three nights I had agreed to, so again I found myself contemplating why. Why is it that they wanted me to stay so badly? And why couldn’t I go down the street without getting an invitation from someone else? Part, of course, is curiosity about “the white girl,” but that wears off pretty quickly once I have been around for a few hours. So far my conclusion, coupled with their hospitable nature of course, is that they want me to stay out of boredom. Everyday is the same here. You eat, sleep, sell a few bananas, and.. Well that is about all. Women here are house wives who stay at home all day, and only a percentage of the men seem to do any work. I am, therefore, like a new toy, a toy that everyone who sees wants to grab for themselves. Though the reason I chose to cycle was to be taken in by families such as these, it has started to wear on my sanity always being the center of attention, especially in a context where everyone sits around talking and laughing about you while you can’t understand a word.

Some of the curious neighbors who came by to watch me. I really liked the older men in the village, they were friendly, but didn’t watch me or follow me as the others did.

I went two days to sell the fruits and vegetables in the village a few kilometers away with the girl just younger than me, but I really didn’t enjoy it. Everyone, and I mean everyone, came up to watch me and ask her who I was, and though they meant well, it was frustrating being surrounded and watched every single moment of the day. Again, I attribute this to boredom. With nothing better to do, might as well watch the white girl… right? On the second day, I brought a book, so at least I could sit their reading as they talked about me.

And, like any good toy, you can dress me up! This part was fun though, and I didn’t mind being put into the sari since it gave them something to do. 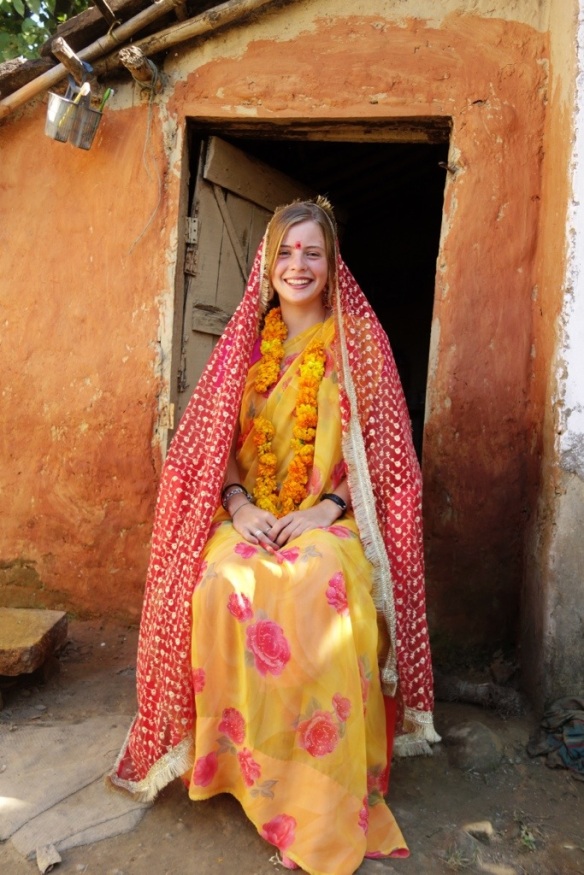 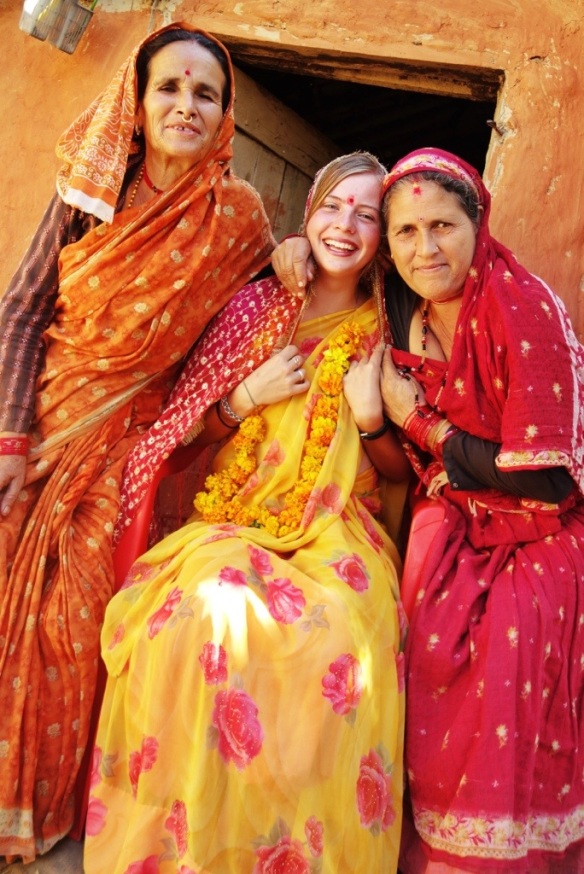 It took me less than thirty seconds to walk my bike up from the house I had been staying at to the road, and in that brief amount of time, I was able to gather a crowd of over a dozen children and women who wanted to see me off. Many of them, some of whom I had never met, handed me beautiful flowers as I mounted my bike. It is in moments like these, when behind you is a group of friendly locals waving you goodbye, and in front, on your handlebars, is a beautiful bouquet of marigolds, that you realize that all the frustrating moments because of cultural differences and language barriers are well worth it.