“Most folks are about as happy as they make up their minds to be. ”

We started out early to beat the heat, but had to stop within half a kilometer as my gear cable had broken. Though Kevin fixed it easily, it took a bit of our somewhat cool morning which meant that we would be cycling more throughout the heat of the day.

Like always, we attracted a few visitors once we stopped to fix my bike.

After cycling through a miserably hot and humid stretch, we wanted nothing more than to find a river to camp next to. We unfortunately realized that, being the end of the dry season, every river was completely dried up. We ended up in a field, a waterless (meaning showerless) mosquito ridden place where we unfortunately attracted curious visitors. These weren’t like the friendly Nepalis in the hills who would stare, but smile, wave, and talk to us as well. These were more like the Indians, physically and in dress, but more evidently, in their attitude. People would wander over and hover over us, staring without ever saying hello. Sometimes they would sit like this for half an hour, just watching us like zoo animals, and if we ever tried to say hello, they would stare back as if we were mad. Though I may not have minded it a few months ago, but after cycling through unfriendly areas such as this in India (Cycling Through Hell) I have absolutely no patience for people who stare at me like a disgusting animal.

One of the reason so many people came by our field was because we happened to be next to a tiny pond (probably the only water left in the area) where everyone came to shit. And since most of them had nothing better to do, after taking their dump, they would come over and stare their disconcerting stare. 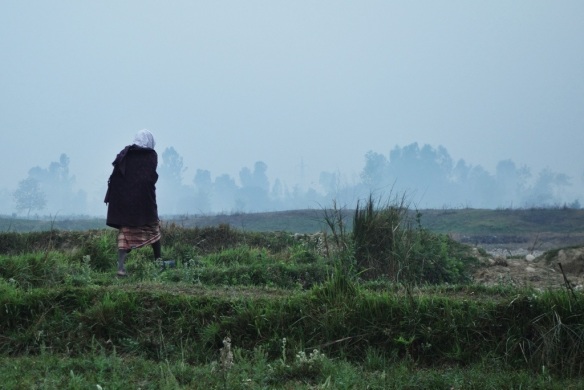 The next few days proved to be just as miserable as we struggled to pedal through the flatlands. Though the road was paved and completely flat, the dreadful headwind and oppressive heat and humidity made our progress slow. We were also both combatting stomach bugs which didn’t make the going any easier. The area had become less and less friendly, and my anger from India kept bubbling up to the surface. We were both miserable, physically and mentally exhausted, and decided to take a little break in a nice hotel for two nights to recharge our metaphorical batteries. It was the nicest and most expensive place we have ever stayed, which, at five dollars each, gave us our own clean bathroom, a tv, and most importantly, a bed free of bed bugs. A shower and two days of finally being left alone made us feel human once again, and prepared us to cycle the rest of the way into the mountains where we were impatiently waiting to start our trek.