“Travel is about the gorgeous feeling of teetering in the unknown.” 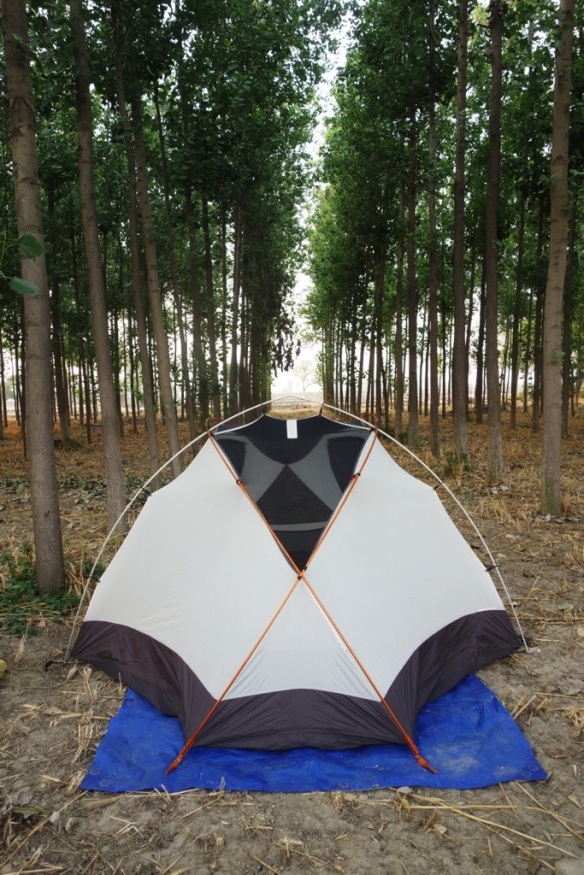 There are some nights that stay with you forever, here is the tale of ours.

They found us. Kevin jumps out of the tent with his small machete in hand to greet whoever has been shinning a frighteningly bright light straight at our tent for the past hour. It’s eleven p.m. and we are trying to sleep in a field in Punjab, a northwestern state of India. We have already had to move once, just a field over and behind a wall, to get rid of annoying young Indian men who would sit around watching us and laughing. They never frightened us, harmless bored men with nothing better to do, but it was frustrating none the less. Now though, it’s a different story.

It started about an hour ago when we saw the light from a man on the other side of the gigantic field walking around it, as if searching for something. At one point during his sweep his light hit our tent, at which point he did a double take. He shone it straight onto us, and though he could hardly see what the object was from so far out, we knew we had been spotted.

Then, all of a sudden, his light went off, which only worried us more. Was he approaching? Was he one of the bored men from before? Was this someone new and unfriendly?

Ten or so minutes later two lights appeared at the same time on the other side of the field, shinning straight at us. For the next forty minutes the lights hardly wavered, and we had no idea how to proceed. Sleep was out of the question. Though we were exhausted from cycling all day it was too eery of a scene to even consider rest. And where would we go if we were to move? We couldn’t safely start cycling at night.

Then the lights vanished again… until now, as they appear jumping over the wall just in front of us. Whoever these people are, they have planned their route carefully. I hear a mans voice and see Kevin and the stranger shine their lights onto each other’s faces. Adrenaline is coursing through them both, we have all been waiting for this moment. As Kevin yells to the intruder “why do you wake us up? What do you want?!” I see four men struggling to climb over the fence and join their partner. They are all carrying weapons, dull machetes and pieces of metal, and as I grip my pepper spray, I wonder how Kevin will hold his own against them all if they decide to attack.

And then I look at their faces. They are all laughing. Far from being young hooligans, I’m starring into the eyes of gray bearded Sikh men with colorful turbans. They are all grandpas, in their sixties and seventies, who far from being dangerous are probably the most peaceful men in India. As the situation starts to unravel we can’t help but join in the laughter as well.

The men immediately all get on their phones to call off their reinforcements and explain to their families that everything is alright. The youngest man, the one who jumped over the fence first explains to us in proficient English that this was his field (we had asked to camp on the field, but when we changed fields a few hours back, we didn’t realize the adjacent field was owned by someone else) and he has in the past had trouble with drunk men on his property. Because of this, he has taken to doing a late night patrol, and when he saw our tent, he had no idea what it was and called what seemed like every Sikh boy in town to come and help. Sure enough, we were soon joined by a dozen laughing youth who thought finding a few sleeping westerners in the field would make the best story for their friends the next day at school. Though they too carried weapons (pieces of metal) as well, I highly doubt they would ever use it as more than a threat.

Kevin and I hastily pack up our tent and accepted the leaders invitation to stay at his house. It turned out that he is a professor, a well educated and extremely kind man who was as scared as we were by seeing a foreign object in the field. We were served tea once we arrived, and his mother and sister had already pulled out cots in order to give us our own very comfortable bed in a separate room. It was nearing one o’clock by the time everything was said and done, and Kevin and I were finally able to fall into a deep peaceful sleep after such a chaotic and in retrospect, hilarious night.

2 thoughts on “A Slightly Unconventional Night”