“We are torn between nostalgia for the familiar and an urge for the foreign and strange. As often as not, we are homesick most for the places we have never known.” 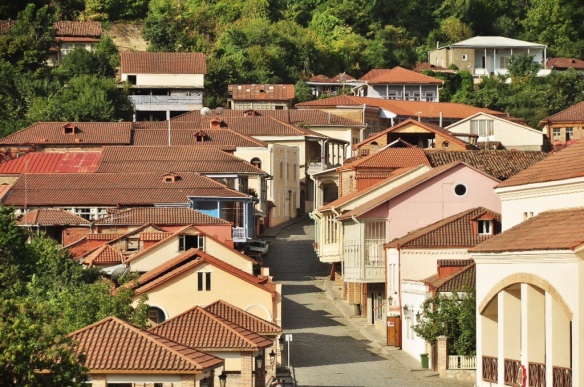 45C is about 35C higher than I typically enjoy. For those of you who don’t know me, I’m a mountain girl through and through and if there isn’t snow on the ground, chances are it’s too hot by my standards. Cycling through the countryside in the Georgian valley has proven to be extremely difficult due to the heat, though in all honesty, it hasn’t diminished my already growing love for this country. If this isn’t proof that cycling (and really life in general) is just a mental game based on your attitude, I don’t know what is. Despite the heat, there isn’t anywhere else in the world I would rather be as Georgia has already proven to be full of wonderful countryside and hospitable people.

We have spent the last three days passing through a very large and flat valley in the Eastern part of Georgia where there are predominately farming fields and very small villages. Though we were on the busy highway for a bit, we are now following small country roads which are much more enjoyable. 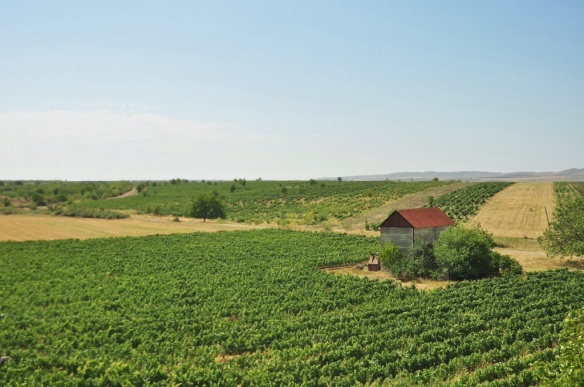 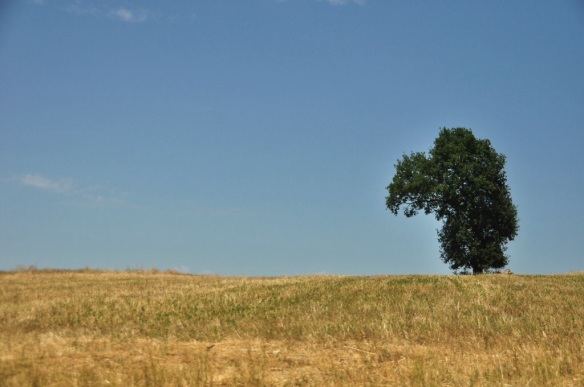 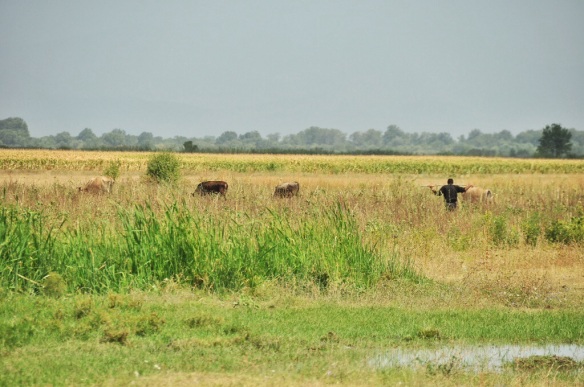 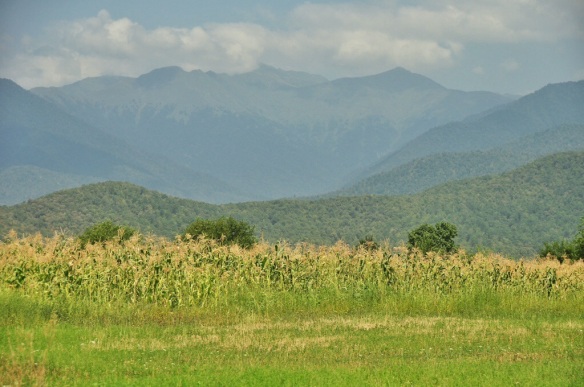 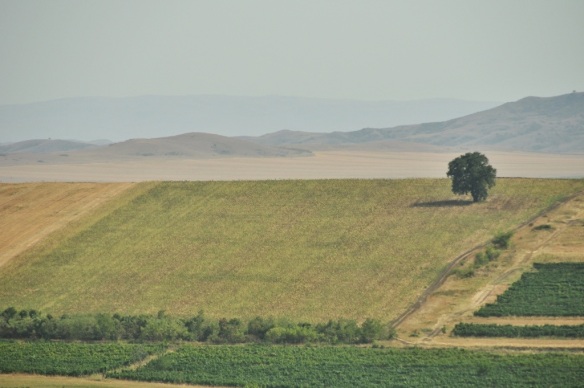 Coming from the overpopulated county of India, Georgia is quiet, calm, and full of deserted beautiful fields with trees and shade perfect for our tent. Camping is also extremely easy because everywhere feels safe, and because every farmer is more than willing to let you sleep on their land (or just invite you into their home). This is such a relief after the headache and difficulty of camping in India, and Kevin and I have realized that “easy camping” should now be a prerequisite before entering into any country because it makes every other part of our trip so much more enjoyable. 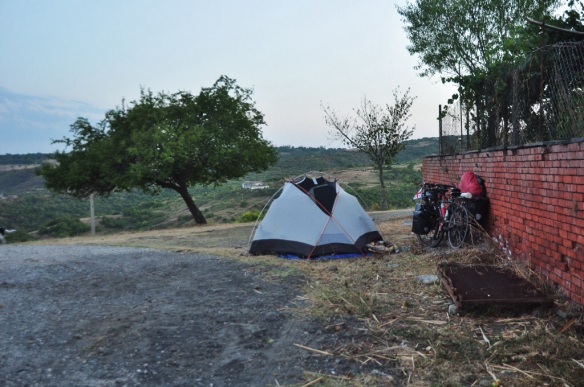 We asked the women who owned a house atop a hill if we could sleep on the hill as well and she readily agreed (plus brought us apples, gave us water, and let us use her picnic bench with a beautiful view). 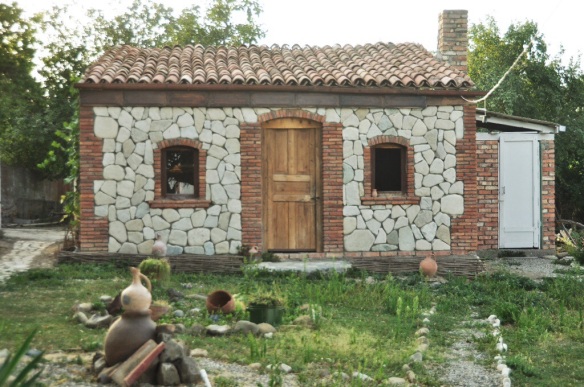 The food had also been delicious so far, especially the homemade cheese and bread which we buy every morning. Besides that, we have eaten meat cooked over a fire on a stick, a traditional “picnic” meal here, as well as large dumpling type things filled with meat. And watermelon, a whole lot of watermelon since everyone seems grow more than they can handle. Cycling with a watermelon sure isn’t easy! 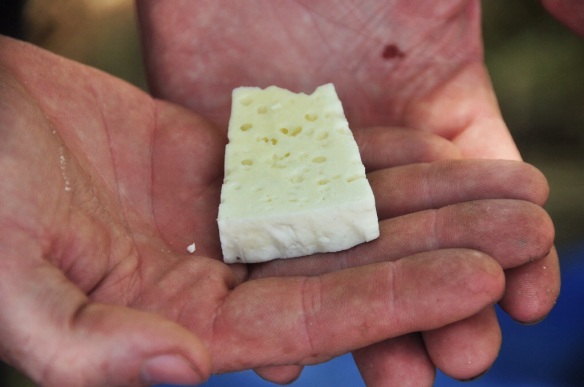 We have eaten a fair amount of katachpuri, which seems to be a Georgian national dish. It’s fried bread with cheese in the middle, and it’s absolutely delicious! Every region has it’s own (sometimes with beans, meat, or mushrooms in the middle as well) and they are always cheap, about fifty cents! 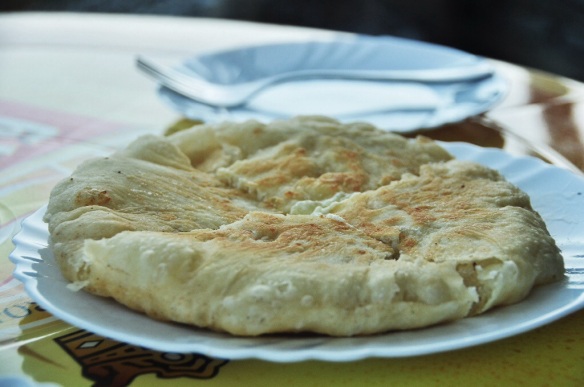 Another speciality of Georgia is their wine, and since we have been passing through vineyards all over the place, we have already been offered quite a lot of homemade wine. Though we appreciate the gesture, as non-drinkers, we can see that Georgia is going to be a really difficult country in that sense since everyone seems to be drinking all the time! Another interesting thing about their drinking culture is that every single time they pour wine someone has to make a toast and everyone has to drink at the same time to the toast (all of the wine in the glass, sort of like an oversized shot). They really can’t seem to understand that not everyone drinks as it’s so ingrained into their culture, so we have had quite a few interesting encounters trying to polite decline this “national drink.” 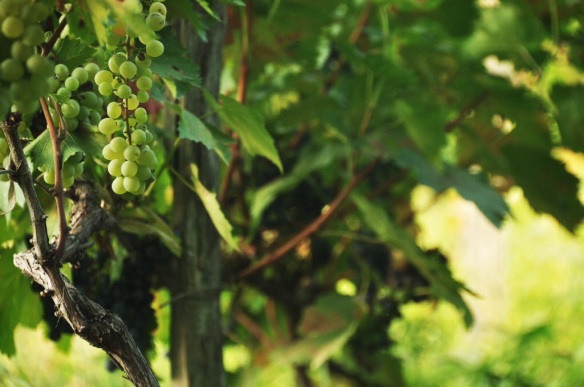 Since it has been so hot, we have typically been cycling early in the morning and then again in the evening, taking a four hour break in the afternoon (or sometimes the whole afternoon and evening) off in order to cool off. Often we find a river to hang out in, or at least some at the side at the side of the road in order to nap and read under a tree. 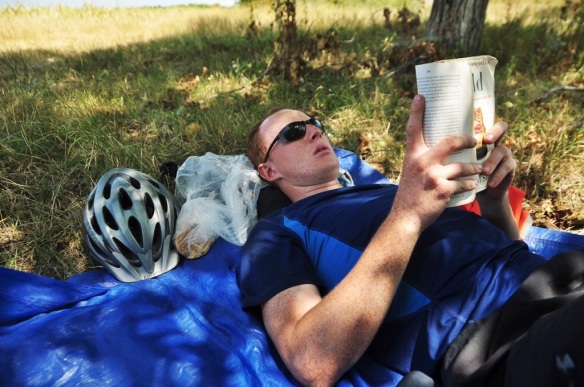 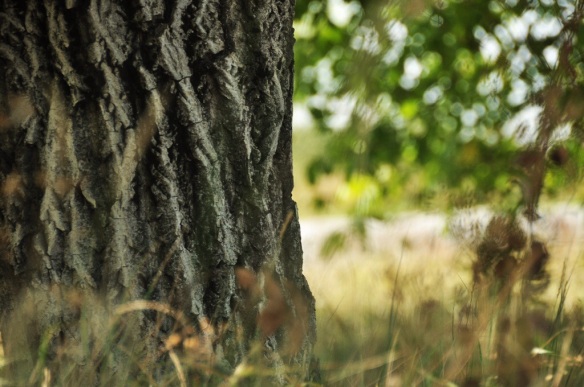 This little town was touristic but beautiful due to its old quaint houses. 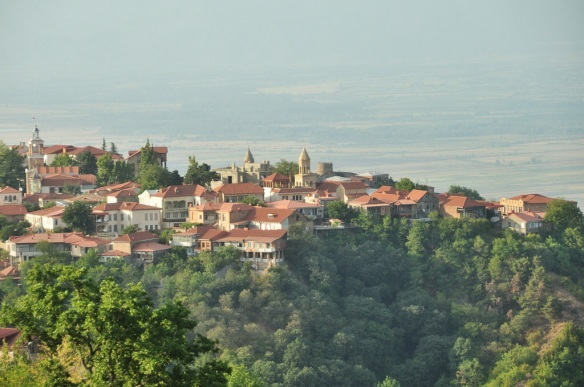 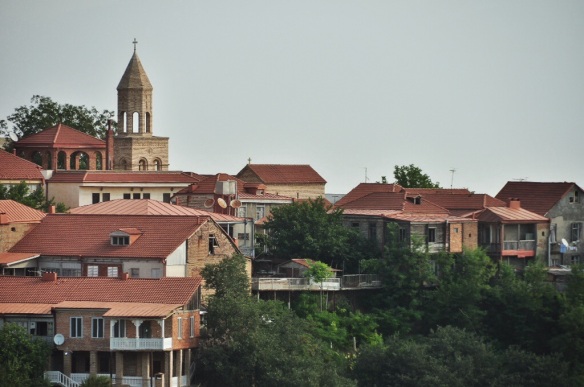 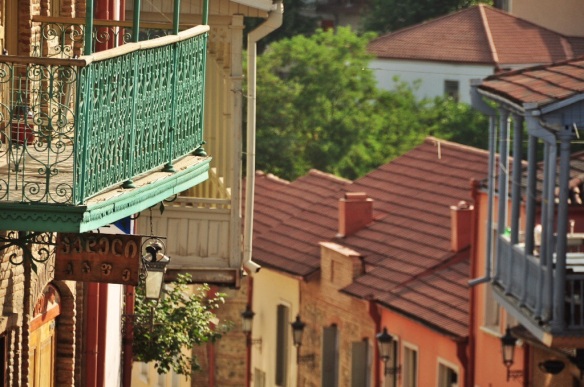 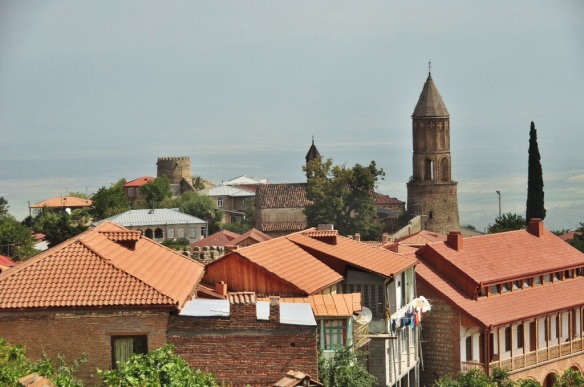 Georgia has been a bit of a shock in the absolute best sort of way possible. We just went from one of the most difficult and tiring countries to cycle through, to one of the most beautiful and easy, and already, I know I’m going to love it here. Though I thought it would be “less developed,” I find it extremely advanced, not only by looking at the buildings and trash collection, but also because the people are well educated and polite and adhere to the same cultural norms as myself. Best of all, we finally fit in!! The first time someone spoke in Georgian to me I nearly cried of happiness because that meant I didn’t stick out like I have for so long. My anger has slowly ebbed away and I now find myself happily waving to nearly everyone we pass with a ridiculously huge grin on my face.

Dinner? People always ask what we eat, so here it is! (Just kidding, don’t worry Georgia had a variety of tasty foods that don’t move as well). 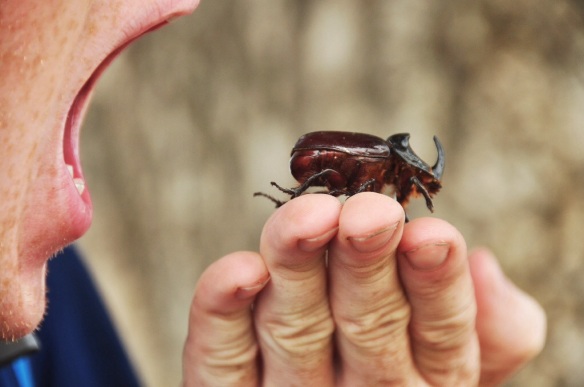 7 thoughts on “The Georgian Valley”