“The core of mans’ spirit comes from new experiences.”

Headed into the peaks!

Trekking through Torres Del Paines has always been on my list as its said to be one of the top five places to trek in the world, and though we are all glad we got to do it, we are now even more aware of just how spoiled and happy we are with the National Parks in the States, parks which we find much more attractive for many reasons (mainly crowd control with permits). But before we get into the details, here are a few photos from our trek (unfortunately I hardly took any, and none of the famous towers, so you should really Google the area to get a better feel for what it looks like).

Camping before the craziness began.

Hiking into the park. 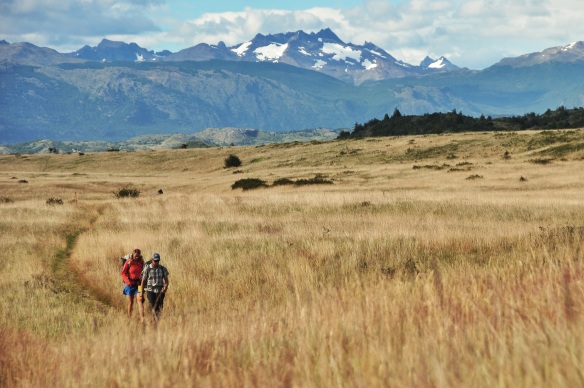 Mike and Emily hiking through the grass.

Emily taking in the view. 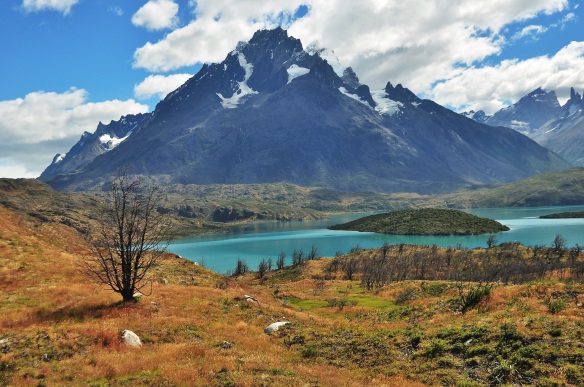 One of the bluest lakes I’ve ever seen. 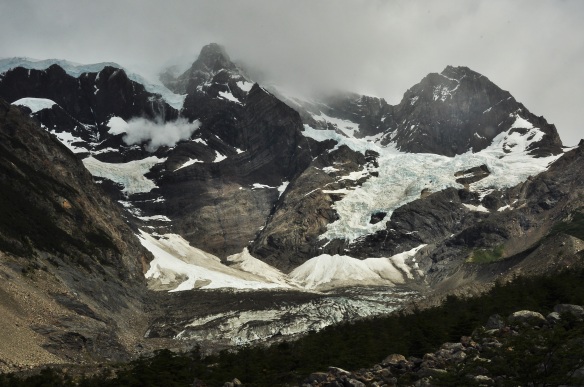 One of many glaciers which constantly shifts and falls, creating huge thunder type sounds multiple times a day. 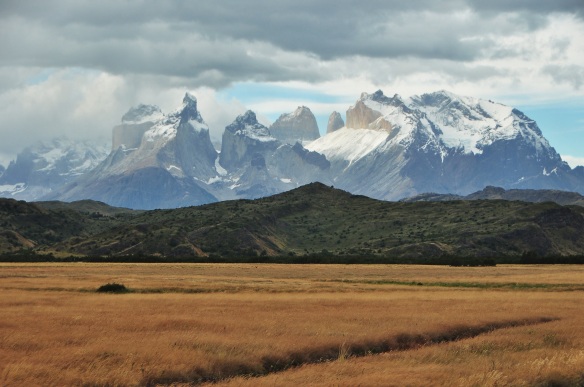 We ended up doing just four days of trekking as we quickly realized that we enjoyed cycling through the park much more than trekking through it and wanted to refind our bikes in order to continue as we usually do. Though the mountains were certainly as impressive and beautiful as everyone says they are (I have no photos that even remotely capture their beauty and splendor, but if you type in Torres Del Paines to google there are some amazing shots in there), the thousands of people in every direction really took away from the experience (and it was really annoying to have to pull over for someone every minute or two, it’s sad to say, but they really need a two lane walking highway going through now that it’s so crazy). Because of a forest fire (caused by trekkers) which ravaged the park a few years ago, you are now only allowed to camp in certain designated areas, all of which are extremely overcrowded (hundreds of tents on tents), and most of which cost 10-15$ a person just to pitch your tent on whatever tiny bit of land you can find within the perimeters. This means that the thousands of trekkers who pass through everyday are all forced into the same few locations, creating a mess of tents, toilets (which were always clogged, many of which had constant long lines), and people which took away from the beauty and solidarity of the giant peaks above. The four of us realized that as much as permits in the National Parks back home can be a pain, we now have seen first hand why they do them and completely support the practice as besides protecting the environment, it means that you will never be camping alongside three hundred other people while you are trying to enjoy the outdoors. Our biggest lesson of the trek was definitely this: permits are awesome, no matter how annoying they may be to get, they truly are necessary and it’s great that the National Parks in the USA have such a great system down.

Once again we were truly able to step back and appreciate our daily lifestyle which consists of a whole lot more nature, solitude, and freedom than we ever found on this trek. Though we are happy we did it simply because we felt we had to (as its so incredibly famous), as with any huge tourist attraction, we have realized that the smaller lesser known places – be them mountains or temples or forests – are always more enjoyable than the huge commercialized ones. Though we heard from others that the park was extremely different fifteen years ago (no huge hotels or buildings, which there are now plenty of, plus of course less people), it looks like we are a few years too late and will instead look forward to trekking more in the States when we get back home to our wonderfully empty Cascades.

Random observations: we all ate way more cycling than trekking, possible just because this trek was extremely physically easy, but still a big enough difference in appetite that we were all surprised.