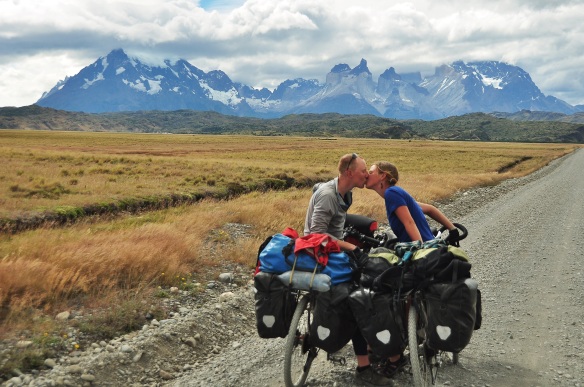 This last year will be remembered by Kevin and I as a year of high highs – from cycling through Patagonia with friends to pushing our bikes up and down rough roads in the Andes – but also, one of incredibly low lows – like when ending our trip early became a reality and I cried for nights on end. 2015 was the year of South America, and all of the wonderful adventures it held, but also, 2015 was the year we began to adjust our thinking from what’s most fun in the moment, to how to accomplish long term goals. It’s been a divided year; a year in which we spent the first six months living in a tent, and the latter half living in an apartment. A year where we had complete freedom for part, and jobs, appointements, and commitments for the rest. A year where we lived in nature, and then a year where we were stuck indoors. This last year has also been the year we lived near family, the year Kevin and I solidified our relationship both on and off the bike, and the year we began to figure out where we want to be in the future. It’s been a year of transitions, and it hasn’t always been pretty, but looking back, it’s also been a hell of a lot of fun.

We began 2015 in Turkey, before quickly making our way down to Ushuaia where we began the South American part of our trip. We spent six months cycling from Ushuaia to Peru, before taking a last minute flight back home where we surprised our families, and started a (temporary) life for ourselves in Astoria, OR. So here it is, our year of adventures from cycling the Andes to canoeing in our own backyard.

Only one dollar for this delicious street meal of potatoes, rice, and meat!

Sleeping in a field of quinoa.

Kevin’s first frat! A little piece of glass was the culprit. 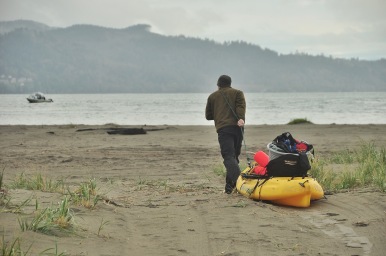 These little bags (the piece of cloth is always this color) is what all of the women wear here. 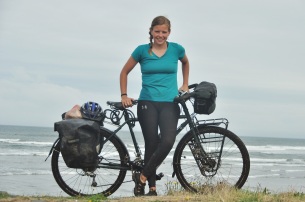 Facemasks ready for the wind and dust!

We got dust thrown on us during the first 100km as cars (tourist jeeps) past. Thankfully after that we were all alone! 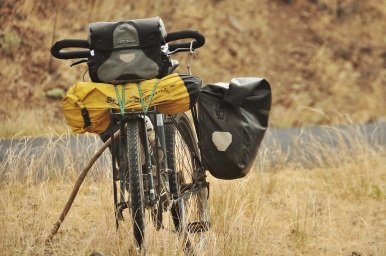 Home sweet home for the night.

The mountains certainly made us feel small. 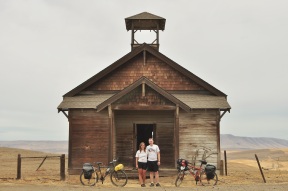 We finished Patagonia with Tim and Jordi, two friends from Idaho who we keep leap frogging every few weeks.

Crossing a rickety bridge to find a field to camp in, Chile, 2015

Nothing like a nicely paved road through the mountains! Chile 2015. 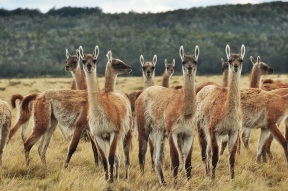 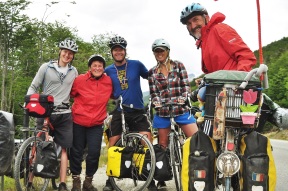 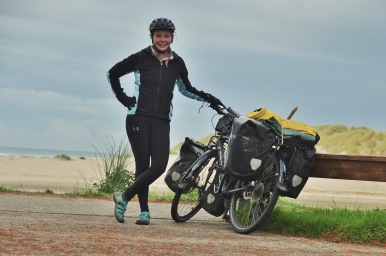 Pushing through the rain and fog, hence the blurry photo. 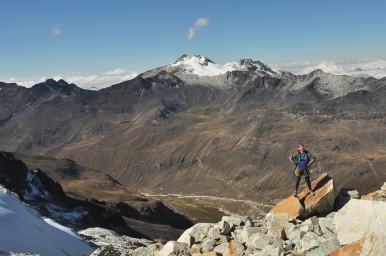 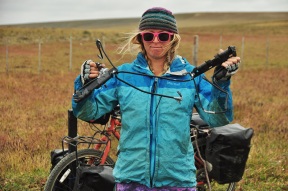 This use to be a front rack. Mike and Emily had a fair bit of bike troubles, though thankfully there was always a creative solution to be found.

And the camping is simply fantastic!! It’s the only time you are alone, truly alone, with only the bright shinning stars to keep you company. At night it cools down so it’s nice and cold, which makes for the perfect night. 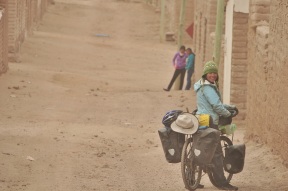 Riding through a small altiplano village.

We got snowed on during one of our climbs which made the world even more beautiful!

This is the typical photo that every touring cyclist seems to have from this region, and for good reason, as this tree really shows how windy this region is.

Though it was populated and people saw us camping, no one bothered us at all. Once again, I felt safer camping here in the open than I would in the USA. 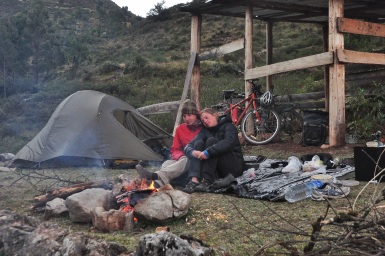 Headed into Bolivia, it’s just around this corner! 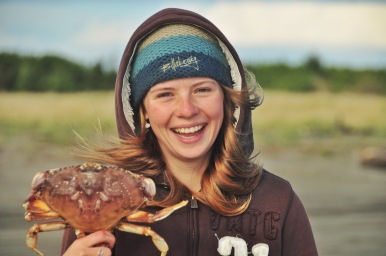 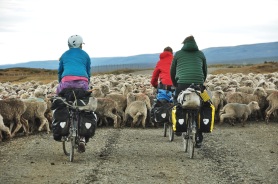 There was a whole lot of salt due to the mineral deposits throughout this region.

One of the towns in Cappaocia. Now they are filled with resorts and resaurants, some of which are in caves. 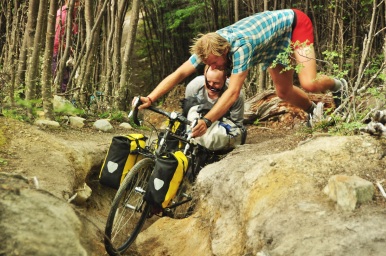 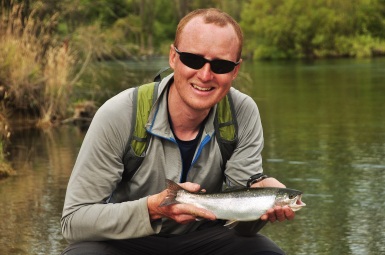 You can see Kevin to the left, a tiny blob cycling in a vast landscape.

Caught my first trout on a fly! 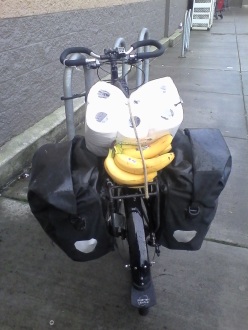 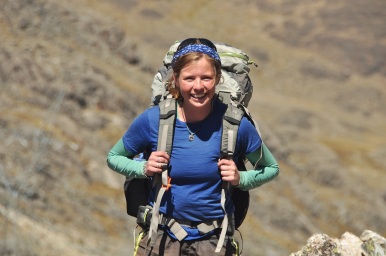 Setting off at sunrise to enjoy the whole day.

Reading in a tunnel when the wind got too strong. Patagonia, 2015. 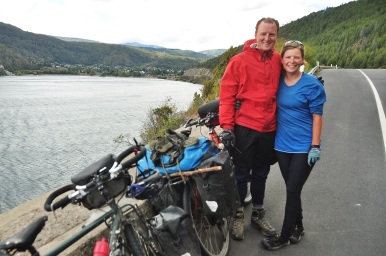 Kevin and I outside of San Martin.

Hanging out along the highway, Chile 2015.

Kevin in his chefs hat.

Another lake along the route.

Eating lunch outside the store, a common picnic spot for us now.

Kevin in his “I’m going to rob a bank” outfit, which also doubles as great skin protection from the wind and sun. He caught this fish in a small stream at 4,300m making it by far his most unique catch!

Hiking into the park, Patnagonia 2015.

Kevin carrying his bike up a bunch of roots. These roots, which were absolutely all over the trail, is what made the going so slow. 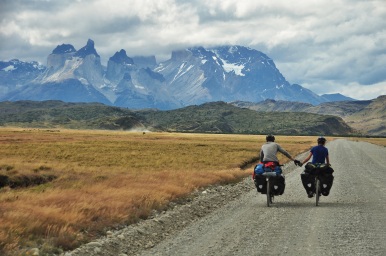 Tough riding! It took us nearly all day to cover 40km.

The uneven roads were mostly in good condition, though there were sections (one 70km+ one in particular) which was washboard like which was extremely frustrating and difficult.

Of all the old car parts, broken bungees, and single shoes Kevin has found by the side of the road, this hat was definitely his greatest one! Patagonia, 2015.

Typical Andean ladies: the hat, the cloth bag, the long braids, and the colorful pleated skirts. In everywhere except the largest cities, this is how the women always dress. 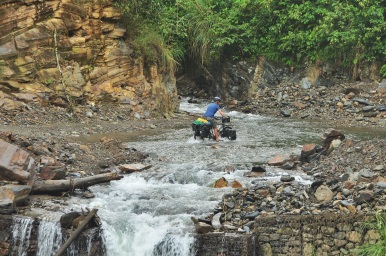 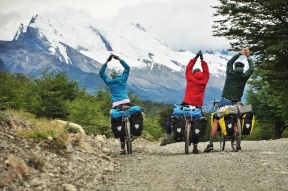 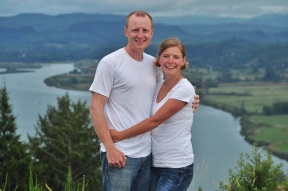 Cycling through the mud.

Me and the two french couples. 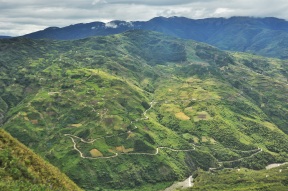 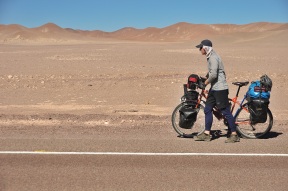 2016 will also be a year of adjustment for us; we will be moving again (and are both very excited about this), and with that, we will both be changing jobs as well (plus, I will be going back to school). We are both excited by what this near year will bring, and anxious to start planning our next adventure (spoiler alert, we are in the beginning phases of planning our next three month bike trip). But until then, we are both commited to making more microadventures happen in our attempt to explore our beautiful state. Here is to what 2015 gave us, and to the new year to come.

10 thoughts on “2015 In Pictures: A Year of Highs and Lows From Patgonia to Oregon”