Though I visited the Salar de Uyuni by jeep on a trip years ago, cycling across was a whole different incredible expedience. The first eighty kilometers were busy with tourists, but after that, we had the other half and the whole other Salar completely to ourselves. It’s really easy cycling across the salars as its flat and hard-packed, though the forty kilometers of sand in between was much slower going. This is definitely a must do route for anyone cycling Bolivia as its just so unique to spend days cycling across pure white salt. 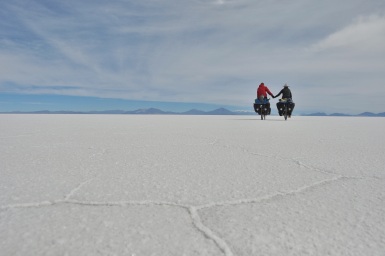 This was one of many mostly deserted villages we have passed throughout our time in Bolivia. Most of the people have left for the cities where there are more job opportunities. 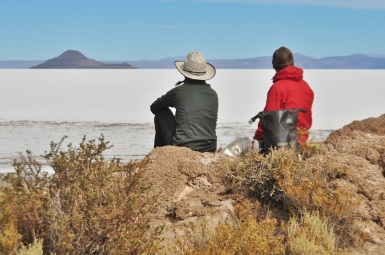 This, for us, is a road. Little jeep paths such as these are what makes Bolivia so fun!

It’s never good when you can see your own tracks in the sand.

Distance: 300km (Uyuni to Sabaya).
Time needed: Four days.
Highlights: Sleeping on Salar, taking funny pictures, town in between salars.
Road surface: Great on Salars, sandy in between for 40km.
Traffic: Some on first half of large Salar, none after that.
Best season: May-October (otherwise not possible due to rain); Completed May 2014.
Water/food availability: Easy to get food and water between salars, leave Uyuni with two days.
Solo female: No problem, you won’t hardly see anyone along this route at all.
Overall difficulty: Easy on salars, medium on sandy middle section.

Very easy, and camping on the salars was definitely a highlight for us. This was definitely our favorite part about the whole experience, and we would highly recommend it. Though there was a bit of wind during the day, it completely died down overnight meaning we had totally quiet nights under the bright stars. Make sure to bring enough water for two days when you leave Uyuni so that you don’t have to stop/camp on the popular tourist island. (And if you don’t want to sleep on the Salar, just go to the second island and there are places to camp for free there, but no water).

5$-10$ a day is more than enough along this route; there really isn’t anywhere to spend your money!

Instead of paying to step foot on the tourist island, go twenty kilometers farther (120km from Uyuni) to camp, eat, or visit the larger free one.

The Pikes on Bikes are definitely the go to on this one; they have GPS coordinates, route descriptions, and step by step directions as to where to go along this unique route.

My blog entries throughout this route:
–Salt and Sand