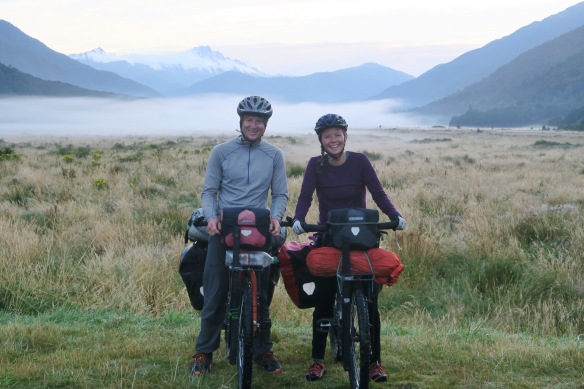 I haven’t written in a while because I haven’t been taking pictures. And I haven’t been taking pictures because it didn’t feel as if I would be telling the whole story. A week along the west coast of New Zealand represented an accumulation of frustrations that we have experienced throughout the country – a lack of dirt roads or alternatives to busy highways, crowded camping, and the sheer numbers of tourists absolutely everywhere – and though the region was geologically fascinating, with glacier covered mountains just meters away from the sea, we had a hard time enjoying it.
New Zealand is busy, busy in a touristic way I couldn’t have even imaged possible. There are camper vans parked on every street corner, hundreds in every campsite, and thousands every single day on the road going every which way. It can be hard to even meet a local in so many towns (at least down here in the South Island) as the number of tourists and people with working visas far exceeds the number of locals during the summer. And we too are tourists, adding to those numbers.

Freedom camping is illegal in most areas of New Zealand as the sheer numbers of campers would quite literally destroy the place, and though this is perfectly understandable, is does take away our favorite part of cycle touring; finding a totally isolated place high on a mountain or down by a river to cook dinner, watch the sunset, and fall asleep as the day turns to night. Instead, we find ourselves camping among dozens (and sometimes hundreds) of others all crammed together, sometimes literally only a foot or two away.

After speaking with multiple other cyclists who cycled throughout the country ten or twenty years ago they all say the same thing – it didn’t use to be like this, and they won’t be coming back again anytime soon. We have also spoken with many who find this place “empty” compared to other countries, notably those who have cycled Western Europe or live in the UK, so, it’s definitely  a matter of perspective.

We are disappointed by the lack of dirt roads or highway alternatives as we had been lead to believe that we could do much of the country following a route – the Tour Aotearoa – described as “similar to the American Great Divide.” What we hadn’t realized is while this route incorporates a lot of really wonderful single track riding, it also uses highways between them meaning that if you are simply going straight down the country, you end up on a lot of pavement.  The Kenneth brother routes have many more options if you are ready to do loops around different regions, which we wished we had done rather than trying to cross country cycle through the country as we have been use to in the past. We aren’t the only ones who feel mislead either. We have met a dozen or so full suspension mountain bike/fat bike bikepackers expecting mostly dirt roads/single track who are thoroughly unimpressed, as, like us, they tried to just head straight down the country.

We are spoiled. After cycling through the Andes and the Himalayas we have high standards, especially when it comes to free camping in beautiful places and high difficult passes on quiet roads through the mountains. And it certainly hasn’t all been negative, in fact, we have had a really lovely trip yet want to share some of the realities of our tour as well. New Zealand does have some really amazing multi-day mountain bike routes as well as 4X4 roads which lead to huts in beautiful places. New Zealand has worked hard to increase cycle tourism by creating these routes throughout the country and we can see how in the off season, when the in between roads aren’t so busy and the campgrounds aren’t so full, New Zealand would be a really enjoyable place to ride – especially if you go into it ready to do squiggles in the various areas with the most trails.

We loved the Molesworth station and St. James route in the northern part of the South Island, the Wilderness Trail in the middle, and the Around the Mountains trail down south, as well as many different sections of the North Island (which we now realize is much less busy in general). And the country is visited by over three million people every year for good reason; it really is beautiful, the kiwis really are incredibly friendly, and there really is a lot to do in terms of outdoor adventures. And the rivers. The rivers are stunning. I have never seen so many clear, clean, colorful rivers in my life.

If someone was to ask, we wouldn’t recommend cycle touring New Zealand, not in the traditional road cycling way anyways, but with a self-contained camper van (self-contained vans can camp for free whereas nobody else can), packrafts, a backpacking backpack, and mountain bikes with a bikepacking set up we think New Zealand would be a great country to visit during the off-season. From April – December (weather wise, we would suggest March-May, and November, December) there are two other trekking routes which open up to mountain bikes, plus, all of the other trekking routes see a huge decrease in users meaning you would  be able to find yourself  solitude pretty easily.  With a self-contained camper van you would be able to pull off and camp in a whole lot more places (for free), plus, you would be able to drive between the mountain biking loops through highway sections where the riding isn’t all that great. And with packrafts you could explore (and fish!) all of the breathtaking rivers throughout the country. Or, if you are keen to simply cycle (and not add to the overwhelming camper van situation) then cycling the country during the off season would be lovely.

Since we are lucky enough to be here, spending time together on an extended vacation doing what we love, we are most certainly going to make the most of it even if it isn’t always what we had expected. Along the west coast we figured out that by waking up at six we were able to enjoy the ride for a few hours before the herds of camper vans began their daily migration, and I have begun trail running before or after our rides which has allowed me to explore trails without a single other person on them, and watch sunrises or sunsets from various scenic locations. We are also planning out our next month to include some of the notorious mountain biking routes, as well as some other adventures that should take us much farther away from the traffic (there will be packrafts involved)!
The only three pictures I took this week: us at sunrise enjoying the mountains and momentarily quiet roads (at the top of the page), a photo (no added color) which shows one of the amazing sunsets we got to witness, and a random mountain who happened to get his photo taken.
*As this post has gotten controversial I would like to remind those reading that these are our personal experiences and in no way negate or alter whatever you may have or will experience here, and we are open to (politely shared) suggestions or routes that you loved on your own tour here. 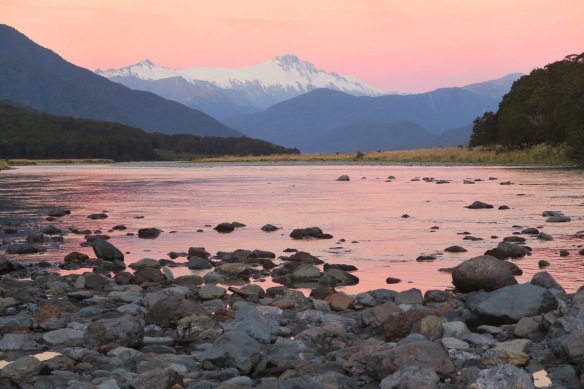 32 thoughts on “Rethinking New Zealand: Cramped and Crowded and Not For Cycle Touring –  At Least Not in Summer”