“I began to realize how important it was to be an enthusiast in life. He taught me that if you are interested in something, no matter what it is, go at it at full speed ahead. Embrace it with both arms, hug it, love it and above all become passionate about it. Lukewarm is no good. Hot is no good either. White hot and passionate is the only thing to be”

Have I mentioned that I love the mountains? I mean absolutely love. Completely, full-heartedly, and irrevocably. Cycling over our first pass, which marks the transition between Kashmir valley and Ladakh, proved to be some of the most beautiful cycling in the world due to the gorgeous peaks that completely encircled us. Though the pass was tough, especially since it was my first one since last year and my legs are no longer accustomed to so much uphill (and, unfortunately, pushing), the snow capped mountains and piles of snow beside the road made it well worth it.

Right before reaching the pass I turned around to take a picture and realized that there was another cyclist no more than 100m away. Damian, a twenty-three year old French engineer graduate and extensive traveler then joined us for a very enjoyable three days until our cycling paths diverged. 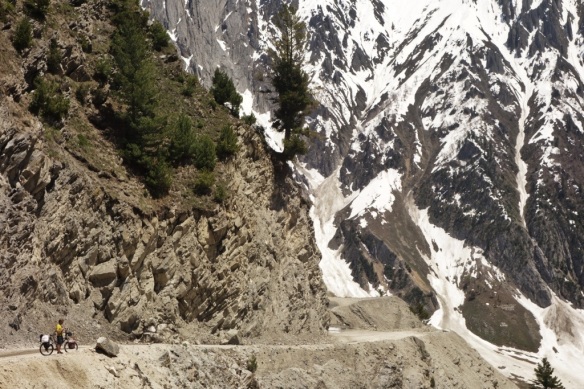 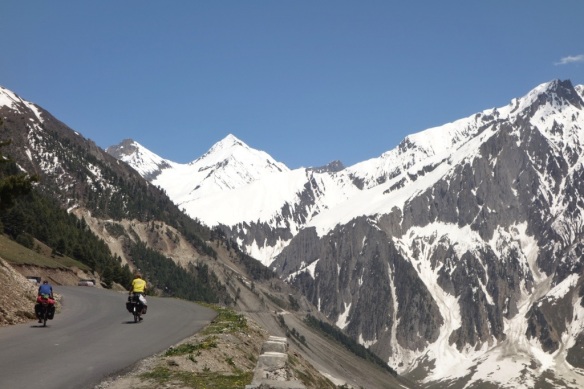 The pass was very busy, in part because there are so many Indian tourists who traverse this route (and pull their cars over at random times to touch the snow since they have never seen it before), and partly because the cars have to stop every few minutes to ensure that the car in front makes it up the steep rocky path without falling backwards into them. Another peculiar aspect to this pass was that the cars are only allowed to come from one way (it switches off everyday which way is allowed) since the road is simply too small to accommodate two cars at the same time. Lucky for us, we were usually able to sneak by, even if it meant pushing our bikes.

This pass use to be used as part of the trade route with Central Asia and the people of the area use to be porters for that route. Besides being the official start to Ladakh, crossing the pass presented us with a completely different landscape on the other side, a desolate high desert type of terrain rather than the lush green of the Kashmir valley. 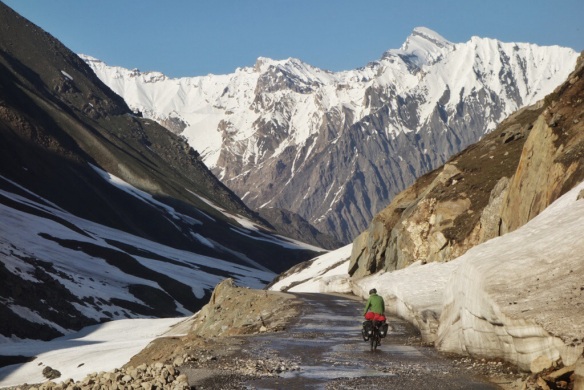 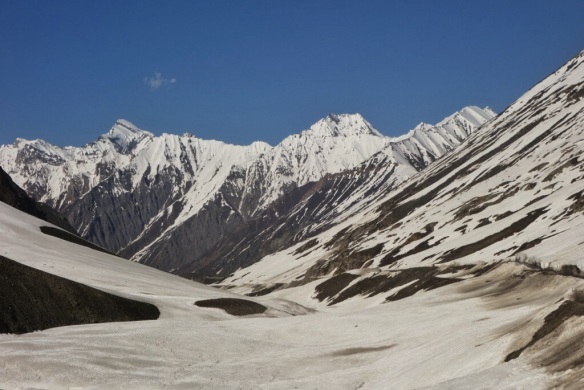 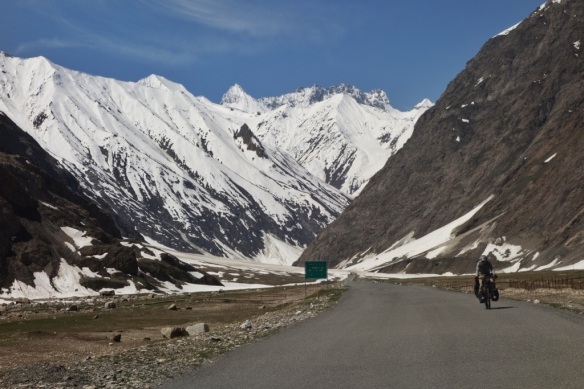 By the time we made it over the pass it was nearly seven o’clock and the temperature had already dropped below 5C. Coupled with the fact that we were absolutely soaked (the road was a bit like cycling through a constant river due to the snowmelt), we were all cold, hungry, and ready to find a place to camp, which is easier said than done when there is over six feet of snow along each side of the road. Lucky for us, we happened upon a shepherds hut in a dry and snow free pasture were we were able to set up camp (inside the hut) for a very pleasant night in the middle of nowhere.