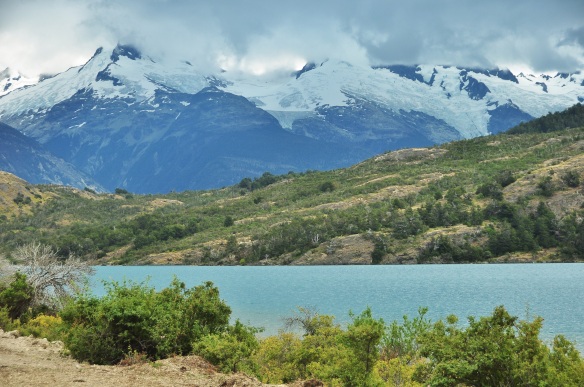 After a few beautiful days of sun we entered into the rainy region of the Carretera, a region which really reminds the four of us Oregonians of home. We can pretty easily predict the weather here as the closer we get to Argentina, the driers, sunnier, and windier it gets, whereas whenever we head west, we end up in the lush green wet forests and waterfalls which surround the white covered peaks. As we were buying veggies in one of these small rainy towns a friendly French traveler started talking to us and eventually invited us back to his place to meet his wife and two small children. Though we went over for tea, tea turned into dinner and then the night as they kindly let us all stay in their cabin in order to avoid the huge storm raging outside. Les Petits Voyageurs quit their jobs and packed up their possessions a few months ago in order to spend the next year and a half traveling around the world with their two boys (age two and four). Kevin and I really enjoy meeting traveling families as someday we too want to travel with our future children. We had a lovely evening hanging out with their family, and I had a wonderful time befriending the kids as they don’t often find others who can play with them in French.

Though most of this 1,200km road is unpaved (for now at least, they are currently working on paving it within the next few years) there is a 200km section of paved which we really enjoyed as it gave us a break from the rough wash board which we are so often on.

After a pass and a wonderful downhill, we turned the corner into the most ferocious headwinds we have yet to see. As we could hardly even walk due to the gusts, we ended up all hiding out in a bus stop as we hitchhiked (30km) and thankfully made it to Coihique, the largest town along the Carretera. As we were walking around this huge city (60,000 people, which is gigantic compared to the other villages of a few hundred people) another cyclist walked up to us and within seconds I asked “hey, are you Kevin… Kevin from New York?” He looked at me surprised and said yes, and then I explained that he had been a day in front of us for the last week so everyone we met going the other way mentioned him. After months of cycling in other countries where it’s increidbly exciting to meet another cyclist, here it’s completely different as you usually meet at least three to six a day! The Carretera is one of the most popular cycling routes in the world, and I can definitely see why. We spent a few days in the city hanging out with our new friend Kevin as well as Emily and Mike before we all parted ways, leaving Kevin and I alone for the first time since Ushuaia.

4 thoughts on “Families, Cyclists, and A Real Paved Road: The Carretera Austral”