“Not all those who bicycle are lost.”

780km in seven days is not what we usually do, but as we ended up on the one and only road going north through Chile – highway five – we really didn’t have anything else to do but cycle. Though the first few days were fine, almost fun as we watched the kilometers fly by on the paved flat road, the last few days were busy and exhausting and reminded us, once again, how much we dislike concrete jungles. It was noisy, dirty, and boring, but we had a large shoulder and were able to cover a lot of ground each day, and though of course this week isn’t going down in our notebooks as a highlight, after nearly two years on the road a little bit of boring really isn’t the end of the world. 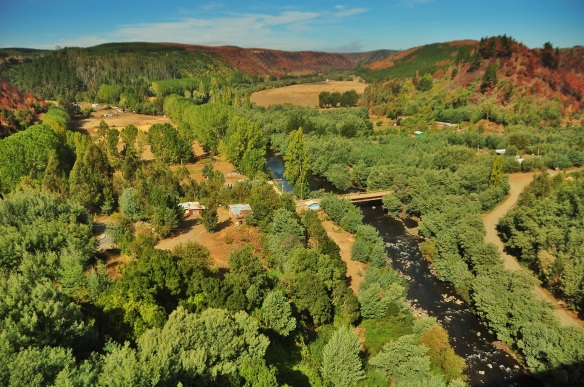 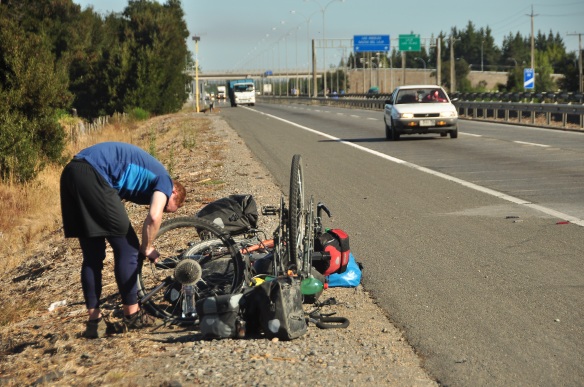 My second flat in 16,000km. The glass and wires all over the road caused us both to get one within two days.

The only thing that kept us going everyday were the petrol stations, which had extremely clean bathrooms and free wifi, and the truck stops, which had equally clean bathrooms with free showers and, if you asked oh-so-nicely, a safe place to camp. Though of course this “urban camping” wasn’t nearly as nice as the wild camping we have become accustomed to, it did come with running water and picnic benches so it was pretty hard to turn down.

Though the highway was surprisingly safe (thanks to the huge shoulder) we did have one close call, which along the dozens of road-side memorials we passed every single day, reminded us about the one thing which us cyclists have to look out for… trucks. Well, trucks, cars, and anything else with a motor really. Just after turning a soft corner on a slight uphill, I heard the Hollywood sound of metal on metal, and turned around to see a huge semi-truck crashing into the guardrail I had just passed. The crushed truck then flipped, and as Kevin and I dropped our bikes and ran to the scene to see if we could help, the driver magically appeared, mostly unhurt, and most surprisingly, not unconscious or dead. As the road itself wasn’t dangerous or difficult in any way, we assume the driver fell asleep or somehow got distracted as there didn’t seem to be any reason to crash on a slight curve uphill, but no matter why it happened, he was lucky to be alive… As were we.

This cartoon says it all, depicted by the wonderful Teagan.

And one more cartoon, by the lovely cycling cartoon artist Teagan who has a wonderfully creative and hilarious blog depicting her current cycle tour through Africa.