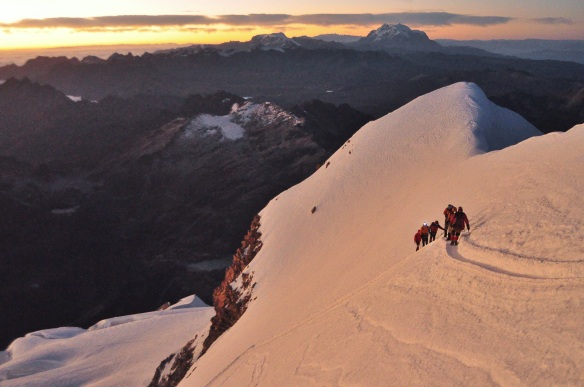 Sitting at the top of Huyana Potosi (6,088m/20,000ft), Kevin, John (an American cyclist we met in La Paz), our guide “Super Mario,” and I watched the world come to life. It was 6h30 and after five hours of climbing, we had made it to the top just in time to turn off our headlamps as the dark sky was beginning to glow. The clouds in the distance made the morning light appear bright orange and red before the sun finally hit our snowy cold vantage point. In front of us lay the cloud covered Yungas, and for as far as we could see behind us was the altiplano (including lake Titicaca). To our right the sprawling city lights of La Paz and El Alto shone bright, while to our left the other beautiful snow capped mountains which make up the Bolivian Cordillera Real stood majestically still. Climbing slowly up the mountain just a few hundred meters away were a few groups of other climbers who would arrive shortly and crowd this tiny summit, but for just a few more minutes, we would have it all to ourselves. 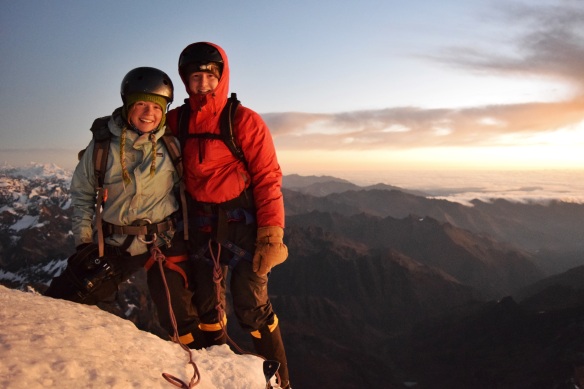 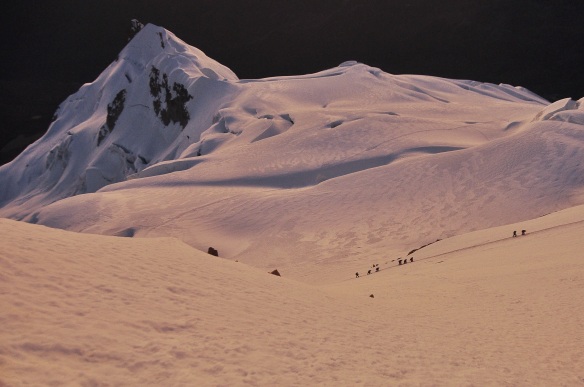 Climbers coming up the last section before the summit. 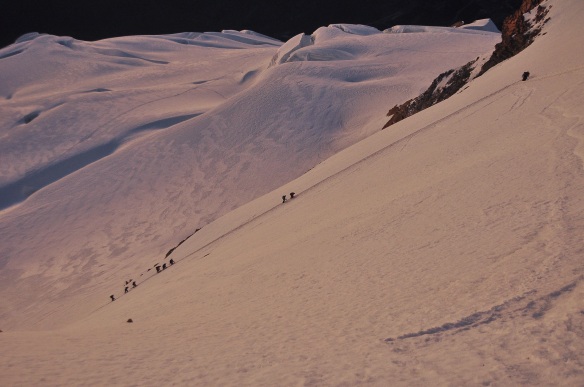 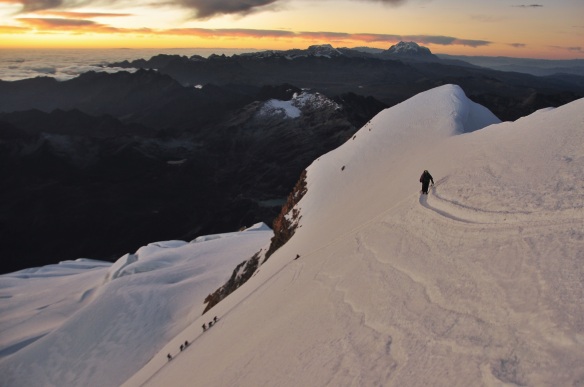 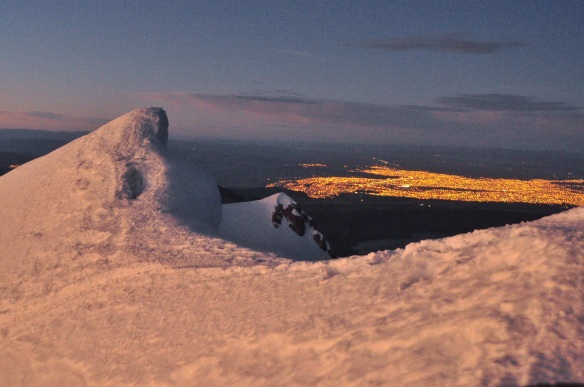 El Alto (sort of like the upper part of La Paz) in the early morning. 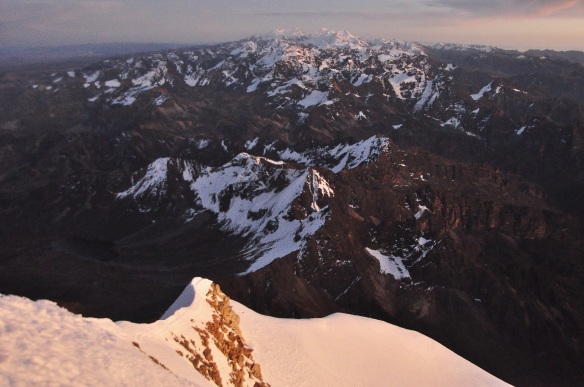 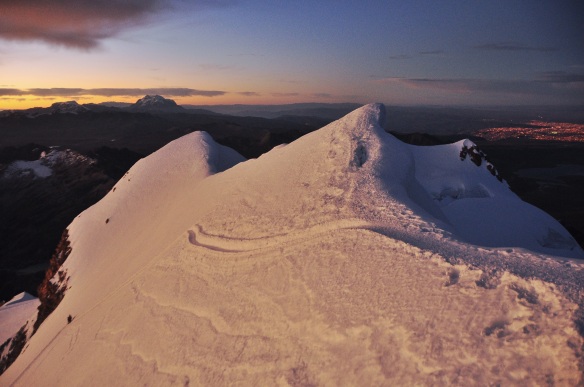 The final ridge to the summit. 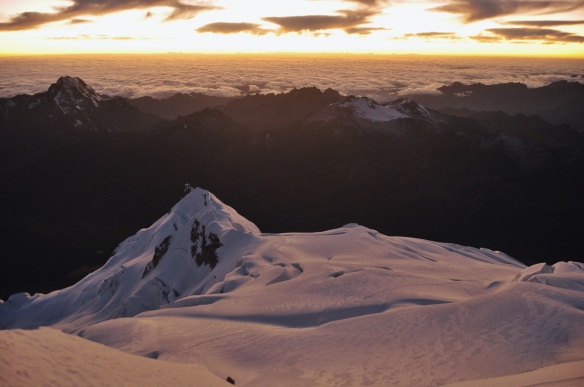 The cloud covered yungas region in front of us. 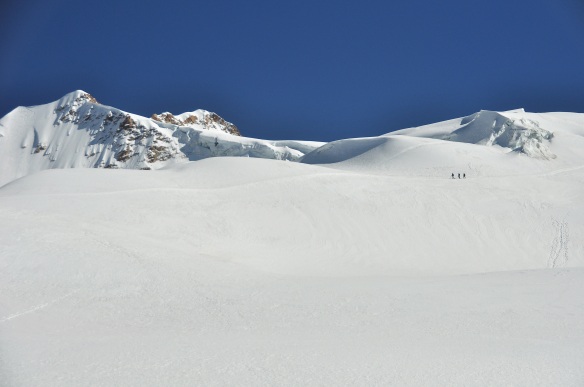 Coming down the morning.

Though the summit quickly began crowed (which explains the lack of photos), the sunrise which continued to illuminate the sky with different colors was absolutely stunning; one of the best sunrises of my life. Our decision to climb this mountain – a mountain I climbed four years ago on my first trip here – happened at the casa de cyclista two days earlier when the three of us decided that we wanted to climb a peak. We signed up with an agency (though we now know that we could have climbed it without a guide, none of us had the equipment this time around), paid our hundred bucks, and headed out the next morning to the bottom of the peak. 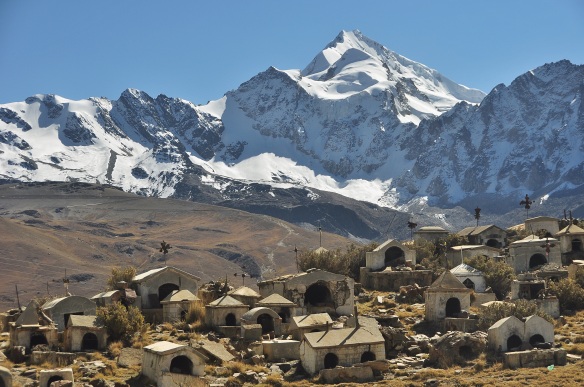 We then hiked for two hours up to the highest refugio at 5,300m. Since the last time I was here a few years ago, more refugios have sprouted up to accommodate all of the tourists who want to climb this peak, and in the high season (May-September) it’s not uncommon for thirty to forty people to be on this very popular mountain at the same time. Our small refugio had eight bunk beds squished together and along with the three of us, there was a French and German couple, as well as a ten person group of Swiss climbers who were in Bolivia for a month in order to climb a dozen or so peaks. 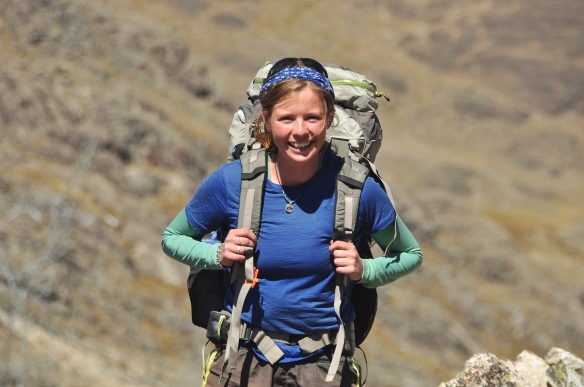 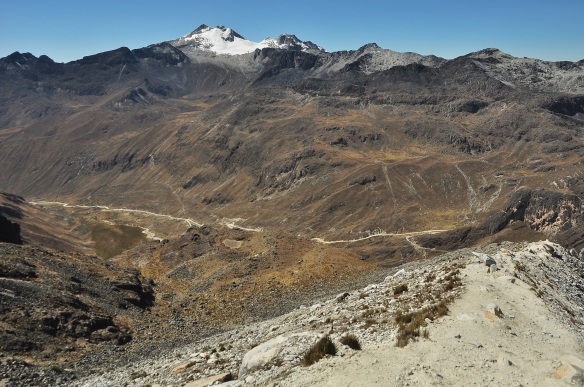 Looking back on part of the hike up to base camp. 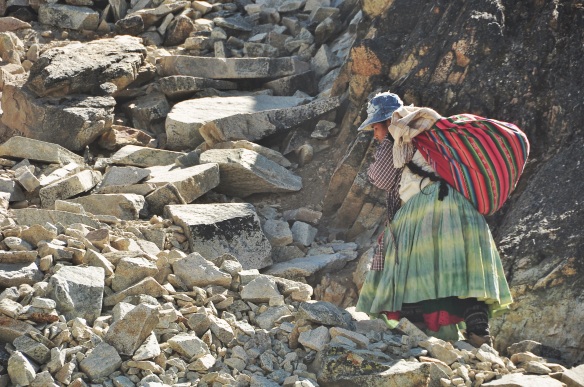 This lady was the cook for another group, and hiked up the trail faster than anyone. 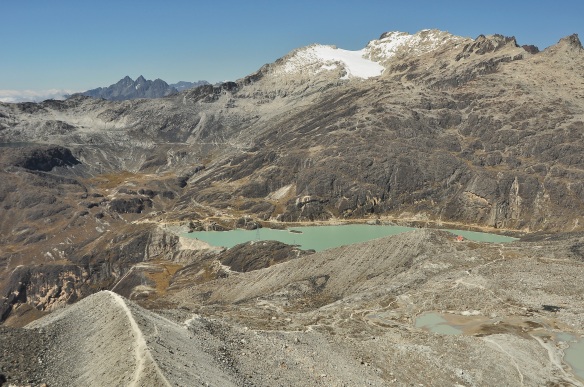 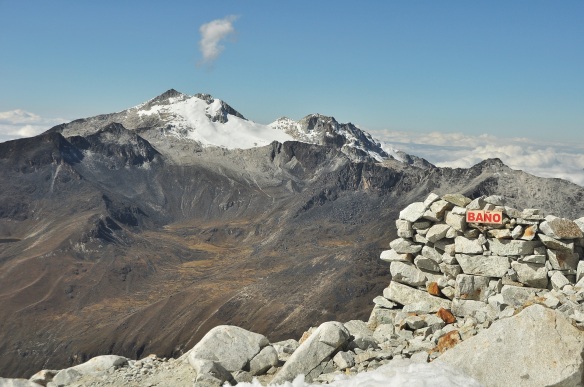 Bathroom anyone? All that was behind this wall was a bucket with a garbage bag of you needed to go number two. Number one could be done anywhere! 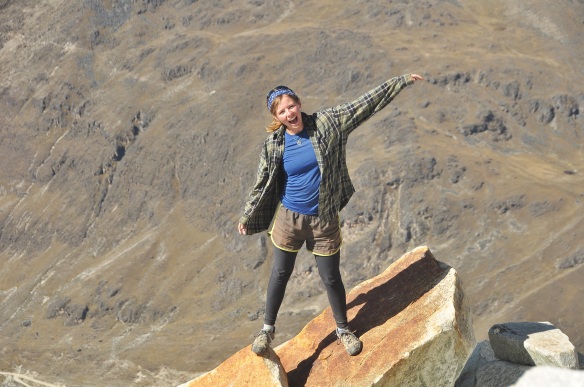 Happy girl in the mountains! 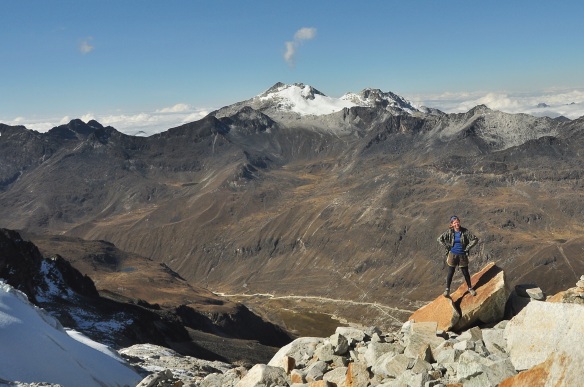 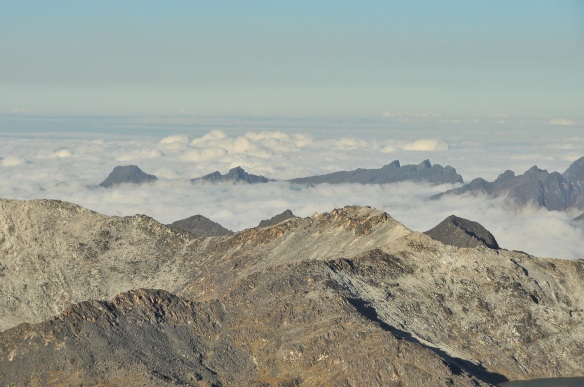 The three of us are fairly well acclimatized under 5,000m, but we all had trouble eating and sleeping during our time at the refugio (5,300m) so when we started to get ready for our climb at one a.m., we were all already tired. Thankfully, our crampons made us feel like superheroes as we slowly trudged up the glacier and though the last hour or so was tough (it was pretty steep and at that point we hadn’t eaten in twelve or more hours) we all made it to the top without any mishap.

Our guide was an older guy who has thirty years of guiding experience and has climbed all of the high altitude peaks in Bolivia. He did a really great job setting a slow and steady pace up to the top which helped us get there without any of us getting sick from the altitude. Though we really enjoyed the climb, it was weird for us to be in a “tour” where they cooked for us and told us where and when to sleep as the three of us cyclist are so use to being independent. That being said, since we didn’t have our own equipment with us, we found that it was a great way for us to spend a day in the mountains and would highly suggest this mountain as a “first peak” for anyone who has always dreamed about climbing!

12 thoughts on “Climbing Huyana Potosi: A Magnificent Sunrise at 6,088m”