Sleeping in a cave in the middle of Turkey.

I’ve decided to take a few of our favorite camping photos from pre-South America and tell a little story about each one. Though the photo sometimes captures the natural beauty of a place, it never really gives the whole story.

I took this photo as I was leaving Kevin and our tent in order to head into a very small village about fifteen minutes away in the Nepali Himalayas. As I was walking, a hail storm started and I ended up taking refuge for over forty-five minutes under someone’s porch, at which point I found three leeches in my shoes sucking my blood. When I finally returned, completely soaked and muddy as I had slipped on my way back, I found Kevin in a floating tent as the rain and hail had completely flooded the area. We ended up having to pack everything up and keep on walking because the area he turned into a gigantic puddle. 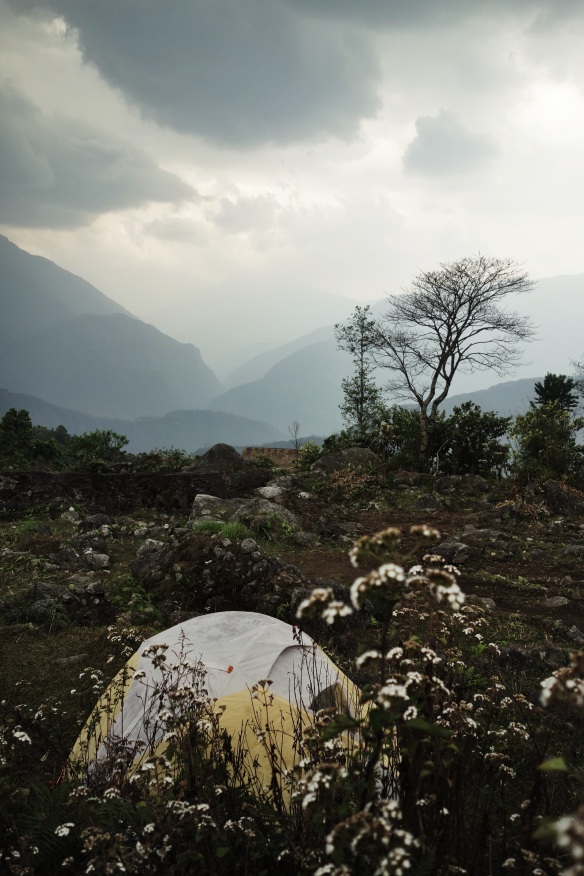 This is one of my all time favorite photos, yet it almost didn’t get snapped. As we had taken a rest day at this spot in the Indian Himalayas, I had taken a handful of tent photos during the day. Somehow, after we had crawled into our tent for the night, I managed to erase all of the photos so I went outside, very annoyed at loosing my good photos, to take another one, which happened to be even better because the sun was just setting as I took it.

Though this looks like a perfectly normal camping spot, it ended up being one of our scariest and now most memorable nights from this trip. After asking permission and then setting up our tent in an Indian farmer’s field, we ended up moving it just a few meters back to where we were more hidden since some obnoxious Indian men had spotted us and were pestering us. We uneasily crawled into our tent once it got dark, only to have a gigantic light shine straight on us from the far side of the field. For over half an hour we were in the bright spotlight, and as I clutched my pepper spray and Kevin his machete, we were at a loss for what we could do. Finally, the light moved, only to appear right on top of us again as three men in colorful turbans jumped over the large fence we were camped by in order to confront us.

After a bit of shouting back and forth, the two older white bearded men began to chuckle when they realized we were simply stunned tourists, and not drunk Indian men causing havoc in their field. It turns out, when we moved our tent we moved it right out of the field we had asked to stay in, and into theirs, and since they had never seen a tent before, they were frightened to see some large object (they thought it was a car of drunk men as that had happened before) in their field as they did their evening check. The three Sikh men got on their phones right away to call off their backup, as they had called every Sikh boy and man in the village to arms (we met them all, with their assortment of scraps of metal and farm tools for weapons, after packing up) before taking us home with them where them and their families treated us with the utmost respect and kindness.

Just a week or so into my trip as I was cycling through Washington I came to the beach, but besides the expensive commercialized spots, there was really nowhere to camp. As I was admiring the beach from the parking lot a couple on vacation in their small motorhome started to talk with me and quickly invited me for dinner (tacos!) and to spend the night in their spot. They were a lovely couple and I enjoyed spending the evening with them, plus, later on they then connected me with some family friends living in Delhi which made my first week in India much more enjoyable.

After climbing and then descending one of the most spectacular passes (even to this day), a pass with six foot snow walls on each side in the Indian Himalayas, Kevin and I, along with a french cyclist we had bumped into earlier that day, were getting a bit desperate as it was almost dark and we had yet to see a piece of ground that wasn’t covered by snow. Out of nowhere we spotted this shepherd’s hut off the road so we quickly made our way over to it. 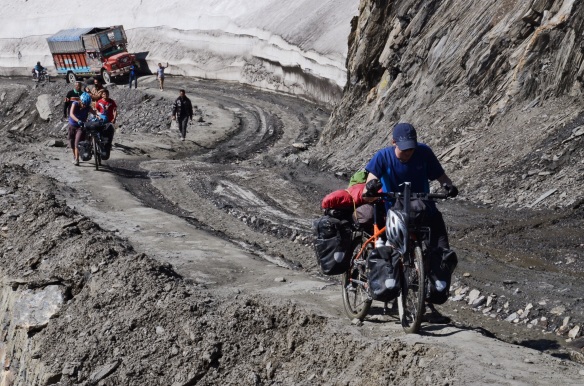 *This post has been preset, as are most of my posts, since we are currently cycling the Peruvian Great Divide, a route without Internet.