The Carretera Austral is said to be the most popular cycling route in the world, and I can certainly see why! This Patagonian treasure is full of colorful clean rivers, beautiful snowy peaks, and easy wild camping opportunities around every bend. The cycling is easy, the route seems to have more cyclists than cars along it, and the fishing is wonderful for those of you with poles; overall it’s a wonderful Patagonian experience for those who love nature. 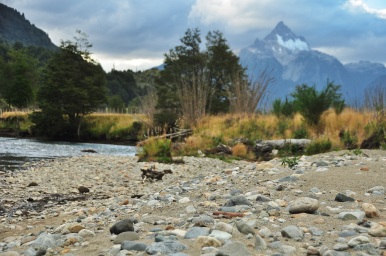 One of our best fishing rivers.

The white capped mountains were also wonderful to follow. 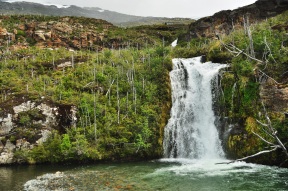 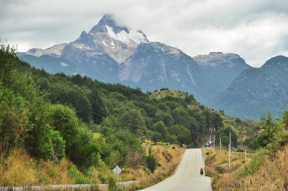 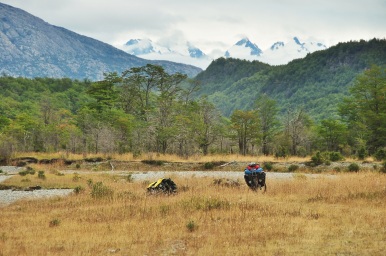 Our favorite kind of camping! 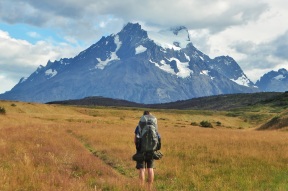 Distance: 1,200km (O’Higgins to Puerto Montt).
Time needed: 3-5 weeks depending on how many off days you want.
Highlights: Fly fishing, easy camping, many cyclists.
Road surface: 20% paved / 80% unpaved with some dreadful washboard sections (though they are currently paving this route and within the next few years it will be completely paved).
Traffic: Not much, especially from O’Higgins to Coihique.
Best season: November-March; Completed February 2015.
Water/food availability: Water is everywhere, food you have to carry for three four days and can only get the very basics (which are very expensive).
Solo female: No problem.
Overall difficulty: Relatively easy – easiest route for us in South America, though it is still off road so keep in mind the going can be slow.

It’s extremely easy to find beautiful wild camping in Patagonia which is what makes this route so great for cyclists. It’s possible to camp in the cities as well, often in the backyards of hostels, for ten dollars a person which is expensive, but a room is easily double that.

The Carretera Austral is expensive, especially in the far south of the route as its so rural. I would count on 10$-20$/day/person did you are wild camping and cooking for yourself, and much more if you plan to eat out or stay in hostels. Spaghetti can be up to three dollars a packet, and cookies a dollar or two, and since there aren’t many options in most of the villages, you buy whatever you can get (which means almost no fruit/veggies).

If you are coming up from Ushuaia you will probably take the hiker/biker route from El Chalten (Fitz Roy) to O’Higgins which involves some pushing, but not nearly as much as many people led us to believe (we have had much harder routes on actual roads in various countries). It’s a fun 20km path, but the ferries are extremely expensive; it ended up being 100$ a person just to get across.

Instead of going to Puerto Montt, we cut off at Futalefu in order to head through the Argentinean lakes district region. Another option is to take a ferry west to the Chiloe region which is at the end (or beginning) of the pan American highway.

This is a great route for beginner cyclists on their first trip, as well as for cycle tourists who only have one month. This has been one of our favorite routes of all times since it’s easy, beautiful, and fun! If you hasn’t ever cycle toured, now is the time to find a bike and head on down here.

Though I’m sure there are various detailed guides about this route, we didn’t use any because it’s really simple; simply follow the one and only road leading from O’Higgins up.

My blog entries throughout this route:
– The Beginning of a Cyclists Paradise
–Following Fitzroy to Chile

We started from Ushuaia and worked our way up Argentina before beginning this route in Chile. Tierra Del Fuego was a fun ride for us as we took about 500km of backroads with two friends we hadn’t seen in over a year. That being said, unless you love washboard roads, and a whole lot of nothingness, it isn’t a must see region on our list.

Crossing the boarder into Chile.

Leave a Reply to Chris in Oregon Cancel reply