The north-eastern Bolivian region of the South Yungas is a composed of huge hills of almost-jungle-like hot and humid terrain where there are always birds a chirpin’, grasshoppers a hoppin’, and rain a fallin’. Though it’s an interesting and very friendly area full of small to medium sized villages atop various hillsides as far as the eye can see, the heat and humidity made the cycling miserable, because even though this is there “winter,” it’s still hot and sticky. Though the heat made us sweat like we haven’t since the hot summer in Georgia nearly a year ago, it did provide us with a variety of foods we weren’t able to find on the altiplano, notably the short and fat sweet bananas I call “Indian bananas” (as we ate them in India) and fresh passion fruit juice, as well as plantains which they served both raw and fried with every meal. Though some of the climbs were steep, we were able to cover ground reasonably fast as the ground was a rocky but not too bad unpaved surface, and as we were between 1,000m-2,500m most of the time, it was extremely easy to breath.

Typical green hills which make up this region. 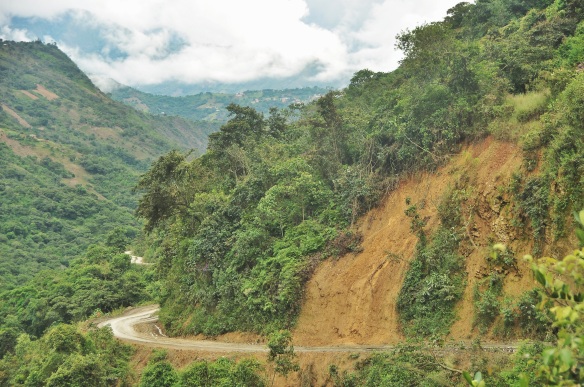 There were millions of butterflies all around!

A lady and her son walking down the road.

The clouds often obscured our views completely, Especially in the morning.

This region has been surprisingly populated, with one of their main sources of income being from the cocoa leaves they grow and sell. We saw huge tarps full of these leaves drying everywhere from soccer fields to in the middle of the road. 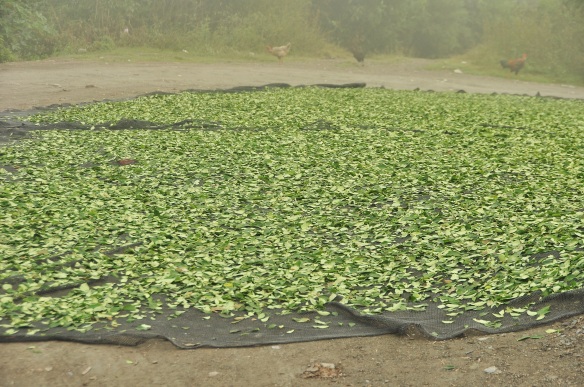 After another sweaty morning of climbing, we entered into the capital of the South Yungas during some sort of community party with dancing, drinking, and a whole lot of confetti. We also saw our first gringos in two weeks here as well, a semi-retired Australian couple on a three month trip, as this town is in the guide books as an “off the beaten track” place to go and expedience what Bolivia is all about. We were surprised by the amount of cars in and around the city as the villages we stayed in before had virtually no traffic (you either walk, or take a bus if you are going to a far away town), and a local told us that the amount of traffic is actually new for them too as with the rise of price for cocoa leaves, people in the area have recently acquired more wealth. We ended up spending two rest days in this very friendly city – the type of place where every vendor you buy from talks to you for at least five minutes – before starting on a 3,600m climb up our last pass back into the altiplano and into La Paz. 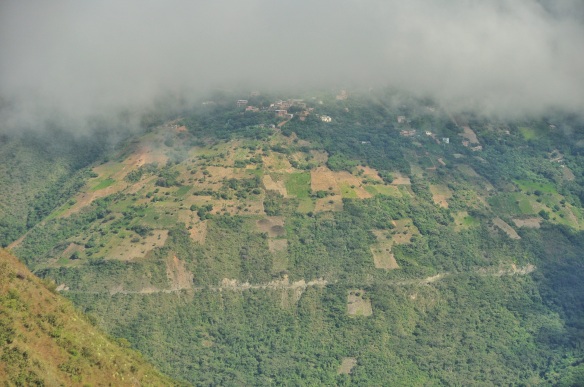 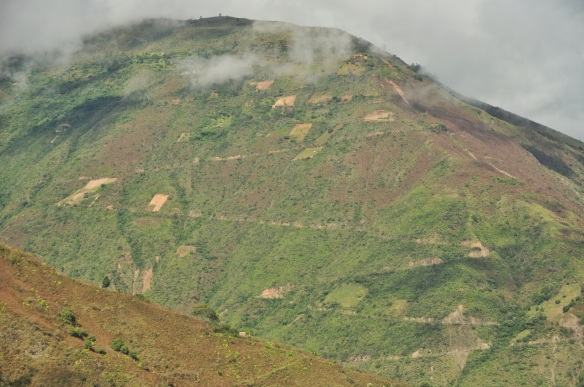 We gained 2,700m of elevation in one day (up to 4,700m) which is probably the most we have ever done in one go. We got to the top just as the sun was setting, and after a quick 20km descend, ended up cycling through La Paz in the dark as we tried to find the Casa de Cyclistas. 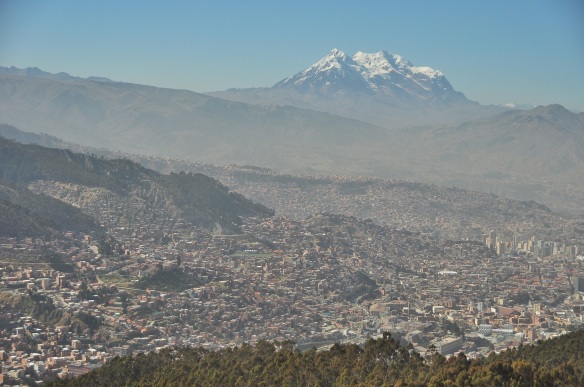 A small fraction of the large sprawling city of La Paz.

Just before our last day of climbing, we slept on a families roof as there was no other flat ground around. They were extremely friendly and welcoming, and sent us on our way with a bag full of bananas! 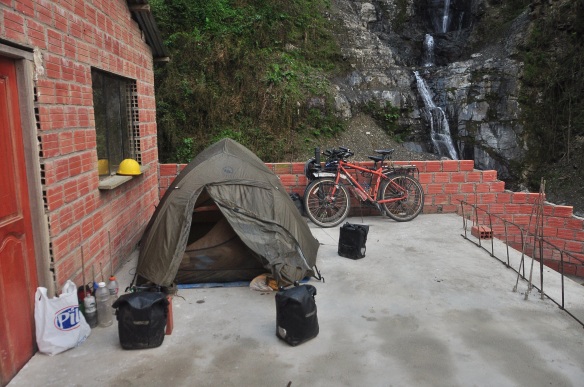 Pikes on Bikes technical details for this route: This blog entry took place along the pink route (from Irupana to La Paz) which goes from Konani around to La Paz.

Though this route was interesting as life down here is so different from life on the altiplano, we were eaten alive by these nasty aggressive tiny yellow fruit-fly type bugs who suck your blood and leave a bite like a mosquito, and combined with the heat and the constant climbing, this made the South Yungas route more challenging for me than any of the much higher routes and passes we completed in the previous few weeks. We also had a really hard time finding anywhere to camp (due to the lack of flat ground) and one night we ended up emergency camping just a few meters away from the road, something we have rarely ever had to do. That being said, it’s a great way for cyclists (or backpackers as you could easily take a local bus around) to see four hundred kilometers of a different side of Bolivia.

7 thoughts on “Coca Leaves And Rain: The Bolivian South Yungas”

Leave a Reply to The Wandering Nomads Cancel reply