The first Bolivian village we entered into was Quentena, which stands in the middle of nowhere at 4,200m surrounded by mines which make up its main economy. A looming nearby mountain has an old road all the way up to 5,700m (6,000m peak) where the highest mine in the world use to operate, and down in the village, women in the traditional Andean attire – stockings, a pleated skirt, and a colorful vest or shawl – watch us a bit curiously as we slowly cycle into town. Though everyone speaks castillano (Spanish) to us, they speak Quetchwa amongst themselves. We eventually find a small shop which sells crackers, cookies, and some clothes, and after buying a few snacks, we continue past a few dozen more mud brick houses until we are once again all alone in the mountains. 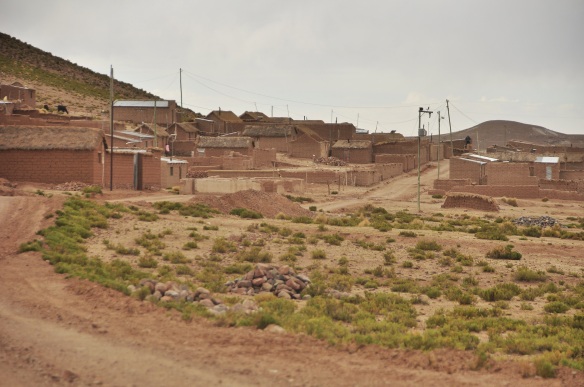 San Pablo was our next small village a few days later. When we wandered in we were starving, and after asking some shy children playing on the street where we could buy bread, we found a house with a paper sign on the door saying “hay pan.” When I knocked, a very surprised ten year old girl with missing teeth took my order, and came back with ten small loaves of bread all for under a dollar. We then proceeded up the hill to what looked like a hotel, where two men who are building (or renovating, it’s hard to tell) the place gave us a beautiful room for the night. The room included dinner and breakfast as its meant (someday) to be for people in the jeep tours, and best of all, for the first time in eight days, we got a shower. And a nice hot one at that. Though the hotel seems very out of place, they have just recently opened it up in an attempt to attract tourists to the area. Though six to eight jeeps on tour go zooming by everyday, they never stop here, and this hotel hopes to change that. For now though, we are happy this town is yet to become a tourist hot-spot as we have always found the locals to be much more friendly and honest in places which don’t rely on tourism.

Though we only passed through two small villages along this route, they gave us a great feel for what villages on the altiplano are like. There are llamas everywhere, sometimes even walking down the street through town, as well as many donkeys, and like in any developing country, there are children playing together outside; something I missed in Argentina and Chile, where (like in the USA), children stay indoors on their electronics instead of running free. It was also a relief to explore these Bolivian towns and realize that Bolivia is nothing like India. It is so much cleaner – there isn’t poop on the streets or garbage running freely through the rivers – and the people here have the same concept of personal space and respect that we do in the USA so there was no extremely uncomfortable aggressive starring, inappropriate comments, or harassments of any kind. It was a relief because though I have visited Bolivia before (I spent four months here in 2011) I was worried that I had seen and remembered the country from a naive tourist’s perspective and was going to like it a whole lot less this time around on our bikes. In fact, the opposite has happened. On a bike, I’ve found the Bolivians to be much more friendly and open than I remember, and I love the country even more than when I left it last time.

Though these were the only villages we encountered, we did see a few clusters of small very rural houses in the seemingly middle of nowhere. They were usually situated on or near a small river, where many llamas (and often donkeys as well) roamed free, and though we saw one or two plots of agriculture, there doesn’t seem to be a lot of growing possibilities up above 4,300m in the sandy inhospitable ground that is found up here. We also passed a few mining “towns” (clusters of two to five houses) though many of them look abandoned; even in the ones which look well kept, we never saw any signs of life.

These houses were close to a mine, though we didn’t see any signs of life near the houses or mine. 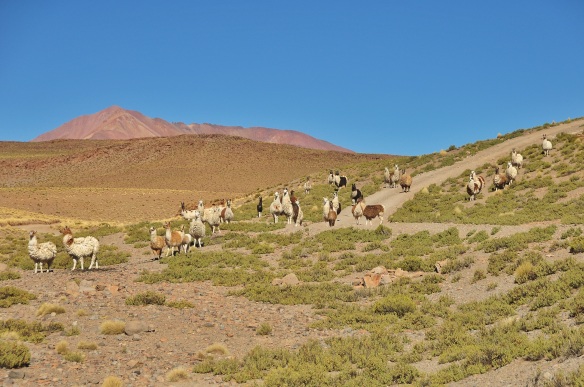 Once we left our comfortable bed in San Pablo, we decided to cut inwards instead of following the Pikes on Bikes route in order to reach a town called San Christobale before heading onwards to Uyuni. Though this route was just as long, it was a lot flatter and in better condition so for the first time since entering Bolivia, we were able to speed along at 20km/h. San Christobale was the first larger town we encountered, meaning there were actually cars and not just llamas on the streets and shops which sold more than just sweets. Kevin and I were also able to buy bananas (our first fruit in over a week) and enjoy a delicious meal of llama steak, veggies, and potatoes in an outdoor market for under three dollars a plate.

Easy cycling! Finally, we were so happy when we went 90km in a day once we got to this road. Unfortunaly, a good road also meant more traffic.

Pikes on Bikes technical details for this route: This blog entry took place along purple route, with the towns we passed through being Quentena and San Pablo. 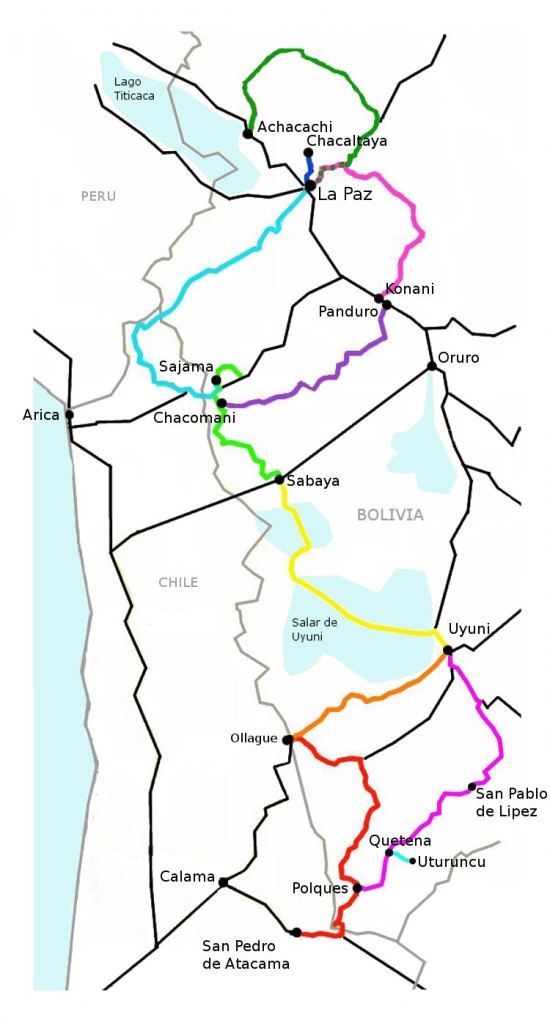 6 thoughts on “Village Life in the Bolivian Altiplano”