Bolivian (as well as Peruvian and Ecuadorian) markets are my favorite markets on earth, in fact, they are one of the many reasons that this whole continent far surpasses any other in my mind. As I don’t feel comfortable taking pictures of local people (I’ve had my picture rudely snapped many a times now, and know that the feeling of a trapped zoo animal is no fun), I’ll take you through a Bolivian market by words.

Markets are a women’s place. Nearly ever single vendor is a women – wearing the typical large pleated skirt, stockings, hate, and colorful shawl which often has a small child inside – and over half of the people buying things are women as well. They are young and old, selling everything from eggs, to hunks of meat, to veggies, with all of their products on display in front of them. There are women selling bags of spices I’ve never heard of, as well as others selling cake with more cream than actual cake (as it should be!) by the slice. Though there are always people meandering around, the vendors have plenty of time to talk with their neighbors, and it’s not uncommon to come across three or four women all laughing together around every corner. It’s also not uncommon to find a women or two falling asleep on her products when the day’s been slow.

My favorite part of the market is the “almuerzo” or lunch that they serve. Depending on the size of the market, there are a dozen, to many dozen women selling meals for under two dollars a piece. This includes a soup, followed by a plate of rice and chicken, potatoes and llama meat, or some sort of combination of meat and starch. It’s delicious, cheap, fast, and in my opinion, the very best way to get a meal. It never ceases to amaze me that in Bolivian tourist towns tourists pay three to four times the price of a local meal just to eat a pizza (or some other “western food”) when there is a lovely market right next door with much cheaper, much more local delicious food to be had.

In the larger markets there are also dozens of women all selling fruit juices, fruit salads, cakes, and other small meals or snacks, all of whom are in a huge line with everyone else selling the exact same thing. Though it seems silly, in Asia it was the same. If you need a haircut, well then find the haircut street where every single shop provides the same service, or if you want to buy some hardware, go to the hardware section of town where every store looks exactly the same as well. As you pass through the different sections of the market you will hear ladies calling out “tomatoes, two for one,” or juiceeeeees followed by every fruit name you could ever think of. When I was in Bolivia last time I often stayed in cities for weeks (or even a month) at a time, so within a few days of arriving I always picked out my “juice lady,” “lunch lady,” “veggie lady” and so on so whenever I walked into the market I knew exactly who I was going to go see.

Though indoor food markets are my favorite, there are also indoor clothing/other stuff markets, as well as huge outdoor markets which on some days of the week, take up dozens of blocks throughout a city. This happened to us on one of our rest days in Uyuni when we woke up to find half the town’s streets crowded with rows and rows of people selling everything from used shoes, to memory cards, to lotion and shampoo. I spend hours wandering around these extensive markets which snake throughout the city, especially since around every bend there is some kind of street food to try.

As you can see, Bolivian street food is basically composed of some kind of fried meat, with fried potatoes. Unhealthy, but oh so cheap and easy! It’s also possible to buy full meals on the street, like those you get in the markets. Typically the smaller “snacks” – small plates of meat and potatoes/corn or stuffed potato/saltena – are put in a plastic bag for you to eat (with your fingers) on the go, whereas the ladies who sell full meals typically have a few benches around their cart where you can sit and eat your meal with everyone else. The snacks usually cost 0.20$-0.70$, and the meals are typically 1.50$-2.00$.

Popular deserts in Bolivia:
-Bottom full of jello in a cup which is then overly filled with heavy cream
-Cake with more cream on top than cake
-Cream filled scones
-Ice cream
-Cup of pure cream

They are seriously obsessed with this super sweet, really rich whipped cream here which they put on every desert imaginable, usually adding more cream than whatever is suppose to be under it. There are little bakeries which sell these cream filled goodies, as well as people on the street with small carts selling purely the cream (which you eat by the spoon from a cup) or the jello and cream deserts. These deserts usually cost about 0.20$-0.50$.

All in all markets are not only a great way to keep fed (and fat!) but they are also a wonderful way to people watch as there are always kids running around, and people of all ages walking the streets, buying little things as they go. There are high schoolers in school uniform walking arm in arm as they gossip and giggle, and there are elderly hunchbacked women who can barely walk making their way through the crowded and busy market as well.

Here are a few photos from our time in Uyuni. This train graveyard has now become a popular tourist attraction. 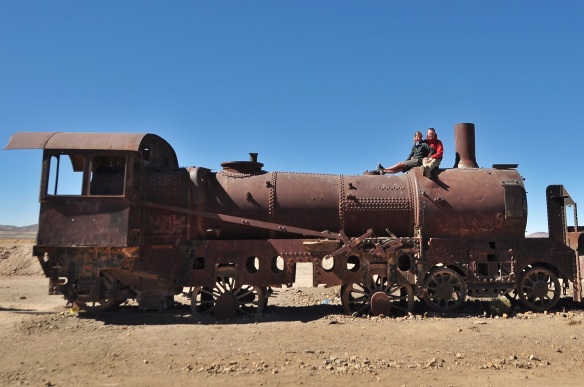 Here is a photo I took four years ago from this graveyard.

We happened upon an animal graveyard as well! 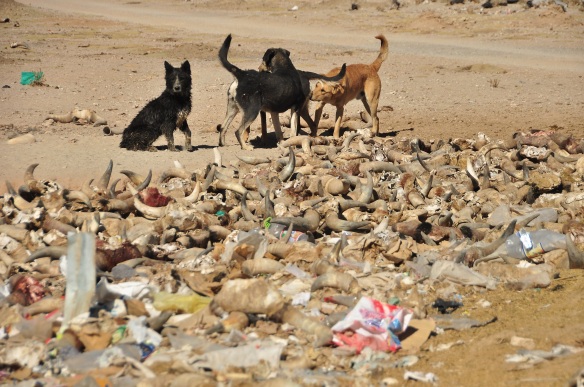 And here is Kevin pumping water in our room so that we have free clean water.

Check back in a few days for some amazing photos from our 300km journey across Bolivia’s two largest salt flats! 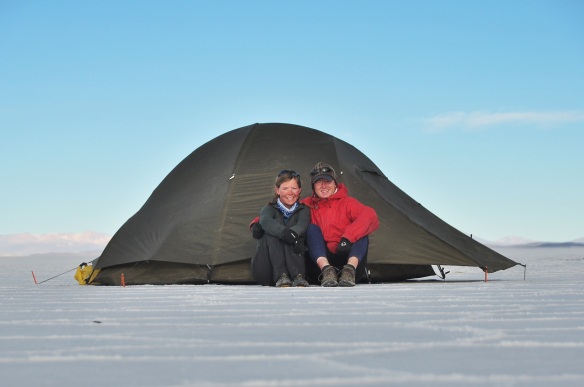 3 thoughts on “Exploring a Bolivian Market”